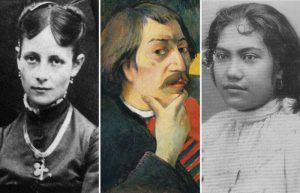 Paul Gauguin met Matte-Sophie Gad in 1872. The young Danish was a member of the family of Gustave Arosa, who was a friend of the late mother of the artist. It was with his help that Paul Gauguin was able at one time to get the position of a stock broker and secure a quite decent financial position.

Matte-Sophie Gad served as a governess in the house of the Prime Minister of Denmark and was able to fully appreciate her new friend. At that time, Paul Gauguin was invariably lucky. Already in November 1873, Paul Gauguin married Matte-Sophie Gad, and already in 1874 the first-born of the couple Emil was born. For nine years from the date of the marriage, Matte gave Gauguin five children.

The business acumen of an exchange broker at that time was appreciated. Gauguin was soon invited to a pretty decent, and most importantly, highly paid position in the bank. Due to the constant increase in incomes, Paul Gauguin ensured not only the comfortable existence of a large family, but also his own passion for painting. Then he allowed himself to indulge in his favorite pastime only on weekends.

The life of a young family seemed happy and quite prosperous. Spouses enjoyed each other’s company, raised children, attended social events. Gauguin was somewhat dissatisfied only with the fact that he could take up a brush only in his spare time from work. More than anything, he wanted not to leave the easel almost round the clock, creating more and more masterpieces.

He dreamed of becoming a full-fledged artist, writing a lot and fruitfully, organizing his exhibitions, selling paintings. When a crisis struck in France, Paul Gauguin decided to take advantage of the situation and devote himself to art, leaving behind a monetary, but so tired office job for him.
However, Paul Gauguin’s paintings sold poorly. So that the family could somehow make ends meet, the artist was forced to sell a rather valuable collection of paintings, and the living conditions of the family had to be somewhat worsened.

The wind of change

The artist’s wife Matte categorically disagreed with the situation. In an instant, she almost turned into a beggar from the wife of a respected wealthy man. Now she lived with children in the wilderness, the family was in constant need, and her husband Paul was working on his next painting, instead of taking care of the family. Spouses on this soil began to quarrel constantly. And then Matte gathered the children and left for her relatives.

Not going to put up with this state of things, Matte gathered the children and left France for her relatives in Denmark. In Copenhagen, Madame Gauguin got a job as a French teacher. Later, she was able to persuade her husband to reunite with her family. However, replacing Rouen with Copenhagen, Gauguin began to feel more and more of his uselessness. Relatives of his wife treated the artist with disdain, and lack of knowledge of the language did not allow him to find a worthy slave in the slightest degree. Paul was forced to be content with the role of seller of tarpaulins.

This could not continue for a long time, and in 1885 Paul Gauguin returned to Paris. The last time the artist will meet with his wife in 1891, but for most of his life he will write letters to her. In some, he will accuse his wife of being more his mother than his wife, in others – swearing eternal love and expressing hope for reunion and a quiet life together surrounded by children and grandchildren.

For many years, Paul Gauguin was literally obsessed with the idea of ​​a trip to Tahiti. It seemed to him: there, on a distant exotic island, all his problems would be instantly solved. Thanks to the exhibition and sale of his paintings arranged by the artist’s friends, Gauguin’s dream of a trip took on quite real outlines. In April 1891 he went on a trip to Tahiti.

In Copenhagen, his wife and children will remain, in Paris – his lover and model Juliette Yue, expecting a child from the artist. And in Tahiti, he will meet the Tekha’amana.

He rented a hut in the wildest part of the island, where the benefits of civilization did not have time to get. Paul Gauguin was completely captivated by the innocent and childishly submissive Tahitian, whom in letters he called Tehura. She implicitly obeyed all his desires, was tolerant and obedient. And, most importantly, she was not like any of those women whom the artist knew before meeting her. Perhaps it was this exoticism that became the most attractive feature of the Tehura for the artist.