Did Leonardo da Vinci have a second Mona Lisa: The Riddles of the “Iselworth Mona Lisa” 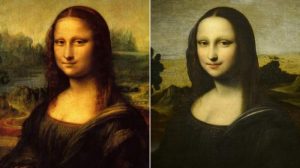 For many decades, there has been debate about whether the Iselworth Mona Lisa is a genuine, earlier version of Leonardo da Vinci’s most famous work, which attracts millions of visitors to the Louvre every year. The opinions of experts, however, vary greatly.

“Mona Lisa”
The portrait of the mystery woman Mona Lisa (or “Mona Lisa”) is the most famous creation of European painting. The canvas is a female waist portrait. A lady sits on the terrace against the backdrop of a foggy landscape. Her shoulders are turned three quarters, her right hand rests on her left (this position of the crossed arms corresponds to all the rules of decency), the smile is barely perceptible, and her eyes look at the viewer. It is traditionally believed that this is a portrait of Lisa Gerardini, wife of the wealthy Florentine merchant Francesco del Giocondo (hence the second name of the picture). But many critics believe that the model is the favorite of the Florentine Duke Giuliano Medici. Leonardo chose the angle for his model, providing her feminine forms, roundness of hands and a mysterious smile. An interesting fact: since the painting first appeared in the Louvre in 1815, Mona Lisa has received many love letters and flowers from fans. She even has her own inbox and … a second copy.

Iselworth Mona Lisa
The name “Iselworth Mona Lisa” got its name from an English collector who returned the portrait to his home studio in Iselworth after acquiring it from a “noble family” in 1913. With her straight dark hair, repeating sfumato technique, a seductive smile, twist of the body and position of her hands, the so-called “Iselworth Mona Lisa” has many similarities with her namesake in the Louvre. According to some art historians, these similarities suggest that the picture is a simple copy of another master, while other researchers believe that this is an earlier, unfinished version of Leonardo da Vinci himself.

Correspondence of the portrait to authorship of Leonardo
At first glance, the second Mona Lisa from Iselworth is very similar to Mona Lisa in the Louvre. A woman with dark hair and a mysterious smile sits at a slight angle to the viewer on the loggia overlooking the panoramic landscape. Except that this woman is clearly much younger than the canvas from the Louvre. If Mona Lisa was written ten years earlier, then she would have looked like that.
The fact that Leonardo could create two Mona Lisa is quite likely. Throughout his career, Leonardo (along with his assistants) wrote several versions. For example, Madonnas in the Rocks, Madonnas with a Spinning Wheel, and St. Anne.
In 2012, “the results of 35 years of research and convincing arguments” were presented at the Geneva press conference that the picture was in fact an earlier portrait of Lisa Gerardini, the wife of Florentine merchant Francesco del Giocondo, who Leonardo left unfinished.

Inconsistencies of the portrait to authorship of Leonardo
The fact is that attributing works of art to the authorship of Leonardo is very difficult. Skeptics note that the painting “Aiselworth Mona Lisa” was painted on canvas, while da Vinci worked most often on wood, not to mention other inconsistencies in the detailed technique of writing hair, clothes, and, especially, the landscape.

Smile and happiness
Leonardo uses the famous “golden ratio” to write a composition of paintings, as well as the sfumato technique. This is a kind of smoky softness of the whole composition. Together, these effects attract the viewer’s eye, giving the picture an almost hypnotic power that diverges from its modest size and plot. And the most attractive and magical detail is a smile. This mythologized smile gives the face a provocative expression that embarrasses the soul of the viewer. As a 16th-century art critic Giorgio Vasari described it: “The smile is so pleasant that it was more divine than human.” The famous smile of Mona Lisa envelops the model in mystery, just as the branches of juniper represent Ginevra de Benchi, and the ermine represents Cecilia Gallerani in their portraits. This visual representation of the idea of ​​happiness, proposed by the word “Gioconda” in Italian, made Leonardo the central motive of the portrait: it is precisely this work that is ideal.
Scenery

A mysterious woman is depicted sitting in an open loggia with dark bases of columns on both sides. Behind her, a vast landscape recedes into the icy mountains. Winding paths and a distant bridge prove that people live nearby. Sensual bends of a woman’s hair and clothes, created with the help of sfumato, are reflected in wavy imaginary valleys and rivers behind her. Blurred outlines, graceful figure, dramatic contrasts of light and darkness and a general sense of calm are characteristic of the da Vinci style. Due to the expressive synthesis that da Vinci reached between the nanny and the landscape, it can be argued that Mona Lisa should be seen as an idealized portrait, since she is an ideal, not a real woman.