The tragedy of the author of the most famous portrait of Chekhov: How he lost his family and paintings, and why he got to Solovki Osip Braz 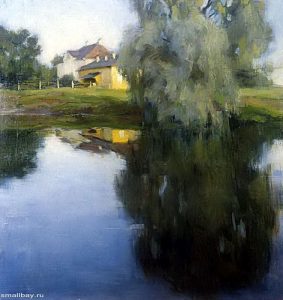 Over several centuries of development, Russian culture has presented the world with a galaxy of brilliant painters, whose works are included in the world treasury of fine art. Among them are distinguished artists and undeservedly forgotten. One of the last is the talented master of the portrait genre Osip Emanuelovich Braz, the author of the famous portrait of A.P. Chekhov from the Tretyakov Gallery. The name of the Russian artist, academician and collector, unlike his creations, few people know for very objective reasons, subject to the trends of the time in which the painter lived and worked.

Osip Braz in his works masterfully combined realism with elements of impressionism and modernism, he was rightfully considered one of the outstanding Russian portrait painters of the early 20th century. However, the artist fell not only on creative success, career growth and a happy family union, but also false arrest, confiscation of the collection, and years of imprisonment spent on Solovki, and the loss of two sons and the death of his wife, which he only survived for a year.

A few pages from the artist’s biography

Braz Osip (Joseph) Emanuelovich was born in the winter of 1873 in Odessa. He received his art education at the Odessa Art School, after which he graduated in 1890 with a large bronze medal, studied for several years in Munich and Paris, where he studied the West European art of painting. Then he moved to Amsterdam to comprehend the mystery of painting by old Dutch masters.

It was there that, under the influence of innovative West European art, the novice master radically changed his painting technique, simplifying the compositional construction, but at the same time adding color spectrum and decorative expressiveness. This technique was especially vividly manifested in landscape painting and the artist’s still lifes.

In 1895, having returned to Russia, he entered the Academy of Arts, where he studied in the workshop of I. E. Repin. And literally a year later, Braz receives the title of class artist of the 1st degree for portraits of D. N. Kardovsky, F. E. Rushitsa and E. M. Martynova. The portrait of the latter was awarded a prize from the Society for the Encouragement of Artists and was acquired by Pavel Tretyakov for his gallery.

In subsequent years, a series of portraits of famous figures of art and culture brought the painter wide fame. So, the artist’s brush belongs to the famous lifetime portrait of Anton Pavlovich Chekhov, on which he worked on the order of P. M. Tretyakov in 1897-1898.

On top of everything, Osip Braz was an avid collector. Even in his youth, a novice painter was carried away by the art of the Netherlands of the 17th century, and by the 1920s he had collected a significant collection of paintings. Also in the Braz collection was a solid collection of works of art from bronze from the Renaissance. And it should be noted that it was this seemingly innocent hobby that played a cruel joke in the future.

The revolutionary coup of 1917 in Russia, which broke many fates among the representatives of the Russian intelligentsia, did not pass over the artist and his family. Although immediately after the revolution, his personal and creative fate developed very well. He worked in the Hermitage as a restorer, curator and head of the department of Dutch painting, and at the beginning of the 1920s he was a teacher at VKhUTEIN.

Dark times for Osip Braz and his family came in 1924, when the artist was arrested on a number of false charges. He was charged with the purchase of works of art with a view to further export abroad, as well as the disclosure of information about the upcoming sale of Hermitage property and espionage. By judicial sentence, he received three years in prison with a sentence in a special camp on Solovki. The entire collection of paintings and sculptures, assembled by the artist at that time, was nationalized.

Thanks to the petitions of Leningrad art societies and influential friends – Igor Grabar and Maximilian Voloshin, Osip Braz, two years later, they are ahead of schedule released from the Solovetsky camp without the right to reside in central cities. Thus, the artist was sent into exile in Novgorod, where he was engaged in the development of funds and restoration of monuments. And in his free time he painted watercolor landscapes and arranged solo exhibitions.

For two years, the artist sought permission from the authorities to leave Russia to reunite with his family, who was then living in Germany. Permission was finally obtained in 1928, and Osip Emmanuilovich left his homeland forever.

Osip married the artist Lola Landshof, the adopted daughter of a major German businessman and close friend Lyubov Mendeleeva-Blok. United by common interests and creativity, the couple lived quite happily. Lola gave birth to Osip two sons. However, after the arrest of her husband, hard times came, the woman was forced to leave Russia in order to save her children. At that time, one of the boys had tuberculosis from poor nutrition.