“The Invisible Artist”, which creates paintings on people, like on canvases 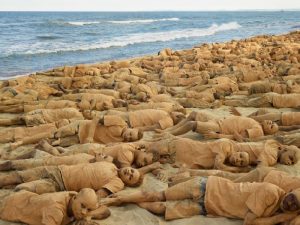 Since today many acts of civil protest in China remain strictly prohibited, a well-known Chinese artist-photographer, master of the original creative camouflage of people, Liu Bolin invented a unique technique for expressing one’s own opinion and view on pressing problems of society. Working with his team of professionals, Bolin seems to dissolve himself and his employees in space, merging with the environment, which emphasizes that modern man is invisible and of little significance to government structures and those in power.

He, with the help of his assistants, fits organically into both urban and natural landscapes, as well as supermarkets and various works of art. Bolin as a canvas can stand, without moving, in one place for several hours against a selected background, while his assistants paint it from head to toe, trying to mix it with the environment.

It is such a technique that brought the artist world fame. Liu Bolin created several cycles of photographs, in which he completely merges with the surrounding space. At first glance, such an optical illusion looks like an ordinary photo, but if you take a closer look, you can see a person on it.

When creating art photographs that immerse the viewer in an atmosphere of anxiety and insecurity, the artist does not use digital correction methods, the invisibility effect is achieved by scrupulous camouflage imitating the background.

As mentioned above, almost all of the artist’s works are devoted to pressing problems of modern society. So, the art project “Hide in the City” held in Beijing in 2005 was an act of protest against the destruction of Suo Jiya Kang international art camp.

Liu Bolin also implemented another art project in which he tried to draw public attention to the problems of air pollution in the capital of China and other major cities. This photo session was dedicated to terrible smog, after which the level of pollution in Beijing reached a critical dangerous “red level”, after which an ecological disaster could erupt.

This is a peculiar symbol of the Chinese population, which may soon begin to decline rapidly in quantitative terms.

The works of Liu Bolin are almost always filled with social problems and often have their own background. They become clear to the viewer when they become more familiar with the facts or events. For example, a series of photographs of “Migrants”, reflecting a lot of people disguised against the backdrop of the pier and rusty ships, is a reminder of the tragic event of 2013, when migrants from Africa, among whom there were six children, tried to swim to China and died literally a few meters from Lido beach. Few refugees who went on a long voyage managed to get to the coast of China, most died on the way. But miraculously, the survivors, as far as they were weakened and exhausted, who practically swam to the shore, were unable to swim to cover a distance of several meters and died.

A terrible sight was shown by Liu Bolin on Lido beach, creating an installation of painted bodies that seemed to be silent ghosts forever left to watch rusty ships.

Artist Liu Bolin (born 1973) hails from Shandong province in China. He currently lives and works in Beijing. Bolin earned a bachelor’s degree in fine arts from the Shandong Provincial College of Arts in 1995 and a master’s degree in fine arts from the Beijing Central Academy of Fine Arts in 2001. To date, his unique photographs have been successfully exhibited in museums and galleries around the world.

Recently, the artist has been working on reproductions of classic paintings on living people. The most popular painting is “Mona Lisa” by Leonardo da Vinci and “Guernica” by Pablo Picasso. Unlike previous works, the author used a group of people on top of which the “camouflage” of the paintings was applied in detail, thereby causing a person to practically dissolve.

In his project, Bolin combines several forms of contemporary art. The main object of creativity is the artist himself. Each time he turns himself into a sculpture, painted by several assistants who masterfully master the optical tricks of body art. The actions, often held in public places and sometimes taking up to 10 hours, turn into a kind of performance, subordinate to the main goal – the complete disappearance of the hero. At the very end, a photograph appears.

Liu Bolin currently lives and works in Beijing. His sculptural works and photographs are in the collection of Chinese and Western galleries, including Paris-Beijing and Klein Sun Gallery.

having secured important subject founders their marriage three guys wastefulness examination natural landscape most famous luxurious vase voluminous scenes with clouds long and happy expressiveness symbol of power quantitative terms extremely important this nickname ordinary people vegetables reproductions considerable problem artistic geniuses expression huge collection the cortex the features portrait resemblance slightly upturned from a technical voluminous styles established a republic sophisticated technique expectantly all confidence cities in those country under hummingbird inexpensive miniatures background several museums lamented that raised children before breaking exhibitions were fragile figurative mysterious smile visual impression sophistication
Ciphers, signs and self-portraits: How artists of the past signed their paintingsNot every masterpiece of painting contains the signature of the artist. There were reasons for this, both at the dawn of the Renaissance and in the modern era; they are…