Secrets of the painting “A Lady with a Parrot by the Window”: How the Smile of a Heroine and a Bird are Connected 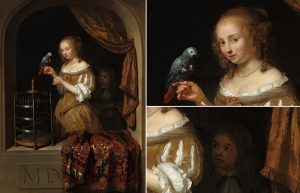 Caspar Netscher is a Dutch artist of German descent, an outstanding portrait painter, and also a master of depicting everyday scenes of the Dutch elite. He also developed a technique that allowed him to imitate a wide range of textures: be it linen, satin or coarse fibers of an oriental carpet. Caspar Netscher is part of a triad of prominent Dutch Golden Age masters along with Rembrandt and Vermeer.

From the life of an artist

Netsher was the son of sculptor Johann Netscher. As a child, he was sent to Amsterdam to study with Hendrick Coster, a little-known artist of still lifes and portraits. In 1664, Netscher moved to Deventer to complete his studies in the workshop of Gerard Terborch. Having done this, he went to Italy in 1658, then to Bordeaux, where Netscher married Margaret Godin and lived there for several years. In 1662, in The Hague, Netscher became a member of the Society of Artists. At this early stage, he wrote small genre compositions, preferring the dark colors and themes of everyday life, which Terborch clearly influenced.

Netsher gradually acquired his own style and in the mid-1660s began to paint more complex scenes with luxurious interiors and richly dressed characters. His works show a special interest in the depiction of silk and brocade. Since 1667, Netsher paid more and more attention to portraiture, eventually becoming a very famous portrait painter. His models are graceful, aristocratic and charming. Among his models was Amalia von Solms, widow of Prince Friedrich Henry.

During this period, he also created historical paintings, but retained the use of small format in both genres. Netsher died in The Hague in 1684. His sons Theodore, Constantine and Anthony continued the work of their father as portrait painters.

“A Lady with a Parrot by the Window” is one of Netscher’s best paintings and one of the indisputable icons of Dutch Golden Age genre painting. It depicts an elegant girl in a luxurious golden dress, looking coquettishly at the viewer. At the same time, the girl feeds an African gray parrot sitting on her right hand. From the darkness of the room, a page carefully looking at her, holding a silver tray. A luxurious oriental rug spilling over the lower ledge reinforces the illusion, as if deliberately hiding part of the Roman numerals carved in stone.

The masterful writing of the picture and the sophisticated technique are manifested in all the details of the picture: a steel bird cage, a shimmering woman’s dress, which Netsher modeled with softer and smoother strokes, a bronze curtain, oriental patterns of an expensive carpet. Netscher’s brush is elegant, its textures are dazzling, and the colors in the picture shine disarmingly. What is the sparkle of pearls on the neck of the model!

The arched window creates the illusion of a “keyhole”, a popular technique in the work of Jan Vermeer, when the viewer accidentally becomes an accomplice in the scene and invades the space of the picture. A sprawling carpet reduces the obstacle and invites the viewer to enjoy this cute scene. This compositional technique makes the young woman even more charming and attractive.

Symbolism of a Parrot

This exotic pet was purchased by Dutch merchants in West Africa. The symbolism of a parrot is closely related to its features – parrots can copy and recreate what they hear without any changes (without filters). Therefore, in art, they are an attribute of “telling the truth.” The parrot appears as a true representation of the human “I”.
In Dutch painting, this bird is most often noticeable and famous than anywhere else. The inclusion of parrots in still lifes is very interesting, because it connects parrots with the material world, wealth and trade. As an exotic creature from non-European countries, parrots were highly regarded during the colonial period. And not only living birds were valued: even feathers of parrots were valued in this era.

In the portrait genre, a parrot often pretends to be people or replaces them, plays the role of a woman’s beloved, or taunts the stupidities of human behavior. This is a mirror of human nature.

The parrot can also function as a symbol of the Virgin Mary. Today, a symbolic association may seem strained, but it was believed that the parrot looked like Mary. Both the parrot and Virgo were associated with typically unbelievable situations: if a parrot can be taught to speak, then a virgin can become pregnant and give birth. The use of parrots in art has significantly changed their symbolic connection with Mary (emphasizing the wonderful nature of virgin birth). Already in ancient times, the parrot was considered a miracle of nature because of its supernatural ability to imitate and reproduce human speech: the Virgin conceived due to the greeting of the angel and the message, in the same inexplicable way the parrot reproduces the heard speech. In addition, the emblems of Mary sometimes depict a parrot sitting on the tallest and thinnest tree branch and out of the reach of the snake: again a symbol of the liberation of Mary from original sin.