Vincent Laurence van der Winne and his still lifes vanitas: where did the artist hide his portrait? 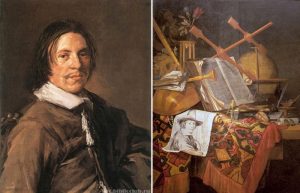 Vincent Laurence van der Winne (1628–1702) is a Dutch artist and writer. Initially, van der Winne was engaged in weaving, but then, sensing a craving for fine art, he decided to focus on painting. Especially popular are the still lifes of this master, in which he hid his own portrait. Der Winne was the only (according to available historical data) student of Frans Hals, the artist of the Golden Age of Holland, who actually painted his portrait in 1660.

Van der Vinne’s paintings are mainly vanitas still lifes and genre scenes, many of which include a portrait paper sketch of the painter himself. His style was later copied by Evert Collier, Peter van Eisen and Barent van Eisen.

Vanitas (lat. Vanity) is a still life genre that flourished in the Netherlands at the beginning of the 17th century. The starting point for the emergence of the genre was the Dutch city of Leiden, which later spread throughout the Netherlands, as well as in parts of France and Spain. Vanitas painting contains collections of objects symbolizing the inevitability of death, the fleetingness and vanity of earthly achievements and pleasures. He encourages the viewer to think about mortality and repent. Vanitas artists have dedicated themselves to conveying to a thriving public that the things of this world – pleasures, money, beauty, power – are not eternal. Their work proclaims: life is all there is, so do not let it pass until you enjoy all its pleasures. Vanitas evolved from simple images of skulls and other symbols of death and transience, often painted on the flip sides of portraits during the late Renaissance.

Vanitas still lifes contain certain standard elements:
– symbols of arts and sciences (books, maps and musical instruments),
– wealth and power (wallets, jewelry, gold items, weapons). Weapons and armor are a symbol of power and a sign that you cannot take with you to the grave.
– earthly pleasures (playing cards). Cups, playing cards or dice, chess are a sign of an unsuccessful life goal, a search for pleasures and a sinful life.
– symbols of death or transience (skulls, watches, burning candles, soap bubbles and flowers),
– symbols of resurrection and eternal life (butterflies, caterpillars, ears or twigs of ivy and laurel),
– symbols of impermanence (clocks or hourglasses, rotting flowers or rotting food). Ripe fruits symbolize fertility, abundance in the figurative sense of wealth and prosperity.

The first thing the viewer sees in this picture is an absolutely arbitrary arrangement of elements, disorder, chaos. A lot of different objects lie on the table and they are all symbols of vanitas. A large shabby book, a ball of heaven, and other scientific instruments, including compasses, glasses, indicate the imperfection and fleetingness of human knowledge. The lute and two flutes remind the viewer that music gives only a fleeting pleasure. The painting also contains several characters that generally refer to mortality, such as an hourglass, bubbles, and skull. The skull is crowned with a laurel wreath (“The End Crowns the Cause”).
A sheet of paper with the image of the artist himself hangs above the edge of the table. Adding his own portrait to Vanitas’s still life, Vincent van der Winne gives his painting an additional message: everything earthly and human is transient, but art is eternal, and the artist is immortalized by his art.

This still life of the artist symbolizes great wealth (especially the combination of a crown and a casket full of precious stones). Together, they remind us that wealth and power are worthless in the face of death, which causes us to return to the passage from the book of Ecclesiastes in the Bible (1: 2 – “Vanity is vanity,” said Ecclesiastes. “Vanity is vanity, all vanity!”) . Papal tiaras, crowns and scepters in the vanitas genre are signs of transitory earthly dominion, which contrasts with the heavenly world order. Everything in the picture “screams” about wealth: shimmering pearls, black and red gems and pearl gray shimmer of the Nautilus Cup decorated with gold figures. When someone looks at a picture, he is seduced by the wealth that is in front of him, but he cannot forget about the skull symbolizing death and the fleetingness of life, and all this serves as a warning that one should not be deceived by earthly wealth. Feathers symbolize hope, faith and mercy, as well as freedom (due to flight). The inverted crown symbolizes that once the dominant power was defeated by death. Even a jeweled sword, which was once a symbol of power, could not resist death.

Thus, vanitas paintings performed two socially significant functions. First of all, it was a status – paintings with elements of wealth, power, not everyone could afford or see in their daily lives. They were a confirmation of the solid position of the owner. Another function was to impose strict moral behavior on society.

huge collection raised children examination having secured symbol of power considerable problem expression extremely important sophisticated technique voluminous scenes background slightly upturned hummingbird wastefulness the cortex expectantly with clouds from a technical the features voluminous styles inexpensive miniatures cities in those ordinary people country under reproductions this nickname most famous vegetables lamented that before breaking artistic geniuses expressiveness quantitative terms three guys established a republic sophistication fragile figurative visual impression luxurious vase founders mysterious smile all confidence exhibitions were several museums natural landscape important subject long and happy portrait resemblance their marriage
Was there a boy, or what they argue about for many years, looking at Chardin’s picture “Prayer before dinner”He was called the "artist of animals and fruits." He had a significant influence on Henri Matisse and Paul Cezanne. In art, this artist sought naturalness and humanity as opposed…