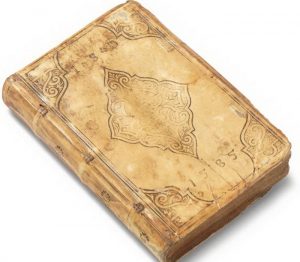 The young ladies of the 19th century were not so different from the modern ones: they also needed attention, recognition, evidence of sympathy from friends and, of course, a cordial secret, which was expressed in allegories and symbols – often poetic. Now social networks are used for this, then – albums, quite intimate, but not closed from other manuscript books.

Unlike diaries closed from prying eyes, albums were created to be shown – to friends and relatives, to those who would also be asked to leave a record. The albums were filled with the “wrong hand”, but at the same time bore the imprint of the owner’s personality – it was he who determined who to include in his inner circle and whose work to keep as a keepsake.

The word “album” itself has ancient Roman roots, and it came to the Russian language from the French language. Those little things that we call albums existed in other European countries – in Germany they were called “shtambuh”, in England – “kipsek”. They began to gain popularity from the 17th century – at first among travelers who put together separate illustrations and notes made in the campaign into a book. Later, university students began making albums: when parting, they left each other notes for memory, drawings, and simply autographs. The tradition was adopted by aristocratic families, each guest was asked to sign in a special book and leave a few words to the owners of the house.

Then it was massive leather-bound manuscript books, with gilding and bronze clasps. The front page depicted the coat of arms of the family of the owner of this manuscript book – for quite a long time maintaining the album was a male prerogative. Albums owned by women began to appear only in the nineties of the XVIII century.
Maybe for this very reason, after a couple of decades, the society overwhelmed the popularity of albums, they played an extremely important role at any social event.

The heyday of album popularity

Album culture experienced its heyday during the golden age of Russian poetry – when A.S. Pushkin, V.A. Zhukovsky, E.A. Baratynsky, I.A. Krylov and other geniuses who expanded the possibilities of the Russian language and Russian art. Albums began to leave the walls of the living rooms, accompanying their owners and owners to balls, on trips and on long journeys. The pages appeared transcribed verses of fashionable poets – including foreign ones – for example, Byron, and often – not transcribed, but composed specifically for the album and written by the author himself. The pages were often decorated with drawings, watercolor sketches – after all, artists too were part of the circle of communication among album owners.

High society albums therefore often represented a real collection of works of art of the time; they included original compositions and illustrations by brush and pen masters. Later, from the pages of such albums, they moved to print media and became public, as happened, for example, with many short poems, madrigals and Pushkin epigrams. The author of the book “Notes of the Muscovite”, published in 1828, P. L. Yakovlev wrote: “Now you rarely find extracts from printed ones or bad drawings of flowers and houses in them. In current albums they want to have drawings of the best artists, the handwriting of famous writers. ”

Many albums containing autographs of Pushkin and other famous poets were lost, as belonged to Anna Kern and the one that was led by Ekaterina Ushakova, to whom the poet was married shortly before the engagement with N.N. Goncharova. Catherine destroyed the album after her marriage – her husband was too jealous. But the album of her sister Elizabeth was preserved, along with the famous Don Juan list of Pushkin.

Composing something in a master’s album – preferably in poetic form – was a secular duty of the guest; and young people who revolved in society, honed the skill of writing impromptu verses or prepared them in advance. Even printed collections were published in which one could find a ready-made version of album verses – all that was needed was to substitute the desired name – the name of the owner. The provincial nobles could not boast of so many acquaintances with celebrities as the capital, and most of the album was occupied by works written off from printed editions, quotes, interspersed with madrigals to the owner or mistress.

By the twenties of the XIX century, albums had become small, graceful little books, their appearance was intended to emphasize the delicate taste of the owner or mistress. Gold-embossed saffiano binding, gilded overlays, dry flowers – the album was taken seriously. There were some unwritten rules of its conduct. The first page was left blank – it was believed that open it – unfortunately. At the beginning of the album, the recordings were made by parents and senior family members, usually these were wishes and parting words to the owner or owner of the album.