10 collectors whose investments in art are millions of dollars 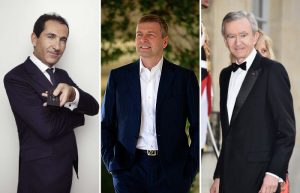 The richest people in the world spend billions of dollars in order to collect a decent collection of antiques and art. Each collector has his own taste and his own idea of ​​the beautiful. But owners of billions of dollars are similar in one thing: they consider art a great investment, which in the future can bring serious profit to the owner.

The collector became a worthy successor to the work of his father, Stavros Niarchos, who laid the foundation for the collection of art of the twentieth century back in 1949. In his mansions in different cities of the world were paintings by Vincent van Gogh and Picasso, Henri Matisse and Paul Gauguin. Philip Niarchos later added to his father’s meeting by buying self-portraits of Jean-Michel Basquiat and Vincent van Gogh at auction, as well as Andy Warhol’s painting “Red Marilyn”.

The French entrepreneur is known not only for his tough business policy, but also for his huge collection of art objects, which today contains more than two thousand works by famous artists. Among his paintings are works by Pablo Picasso, Andy Warhol, Pete Mondrian and Jeff Koons. The collection of Francois Pinault can be seen in two of his museums: the palace of the Palazzo Grassi and the Punta della Dogana in Venice.

The collection of the American entrepreneur began in 1973, when he acquired Vincent van Gogh’s Cabanes A Saintes-Maries. Subsequently, he created a museum of modern art, a collection of which totals more than one and a half thousand works. Plus personal collection of Eli Broad, which includes more than 600 pieces of art. Both collections contain paintings by Andy Warhol, Takashi Murakami, Robert Rauschenberg, Jeff Koons and other artists.

The American producer is widely known throughout the world as one of the most consistent philanthropists and philanthropists. He makes art objects a way to increase his fortune, which he afterwards generously spends on charity projects, support for art and medicine. Among the paintings realized by David Geffen: “Woman III” by Willem de Kooning, “No. 5” by Pollock and others.

An American businessman of Jewish origin does not skimp on the purchase of art objects, of which he has more than four thousand in his property. The collection of medieval art by Ronald Lauder is considered one of the best in the world, as well as the collection of European armor he collected.

The American investor’s collection includes works not only by old masters, but also by contemporary authors. In his collection, you can see the works of Raphael, Konstantin Brancusi and Edward Munch, in 2015 Leon Black purchased a set of the Babylonian Talmud Daniel Bomberg for $ 9.3 million according to a press release from Sotheby’s auction house.

A talented trader collects objects of art, considering them one of the tools to increase his own wealth. He gladly acquires valuable paintings, and then easily parted with him, while receiving a very substantial profit. His collection includes Andy Warhol, Edward Munch, Damien Hirst and works by other famous artists.

The French businessman, who in 2018 led the list of the richest people in Europe, became interested in collecting in 1982. The debut of the collector can be considered the acquisition of Monet’s painting “Charing Cross Bridge.” At the same time, Bernard Arnault does not care at all how much more expensive are the paintings that he acquires for his collection. By no means does he consider objects of art as a source of profit, but considers the works of masters to be a source of endless positive emotions. Even during the acquisition of paintings, he is little interested in the predicted increase in the price of her, he focuses solely on his own sympathies.

The founder of the telecommunications corporation Altice never talks about his collection of works of art, although it is known that over the years he has repeatedly participated in the auction at Sotheby’s auction house. However, in June 2019, he himself became the owner of Sotheby’s, having bought it for $ 3.7 billion. It is known that the new owner of the auction house is well versed in art, loves Marc Chagall, can guess almost any melody from three notes, plays the piano and prefers to stay in the shade.

The Russian billionaire has put together a truly unique collection, which today houses the works of Rodin and Picasso, Gauguin and Modigliani, Rothko and Matisse. And one of the most expensive paintings by Dmitry Rybolovlev belongs to the brush of Gustav Klimt – “Water Snakes II”.

Nowadays, it is not necessary to go on a long journey to distant continents for treasures, it is enough to just come to the local flea market. That’s where the real Eldorado and Klondike are in one bottle. You just walk along the rows with junk and look for your treasure, because it lies literally under your feet – the main thing is not to pass by.