High Renaissance Titans: Who They Are and What Their Contribution to Art History 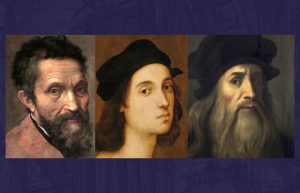 The Renaissance refers to the rediscovery of ideals from classical antiquity. Artists no longer thought about the art of antiquity. Now they had the tools, technology, knowledge and confidence to create in their own direction. In general, the Renaissance was a revolution in realism, when artists and sculptors developed new methods to make their work more realistic.

The High Renaissance also represented a rapprochement of geniuses – an unthinkable wealth of talents concentrated in the same field in the same time interval. While this revival took place in many creative fields – the poetry of Dante Alighieri, the architecture of Filippo Brunelleschi, the scientific experiments of Galileo, works of visual art act as the most iconic representations of the Renaissance.

Era duration
Developing from about 1300 to the middle of the 16th century, the Italian Renaissance was one of the most important and fruitful periods in the history of art. Leonardo da Vinci began to create his most famous works in the 1480s, so most art historians agree that the 1480s were the beginning of the High Renaissance. Raphael died in 1520, and it can be argued that death marked the end of the High Renaissance. Be that as it may, it was the High Renaissance that lasted no more than forty years.
Renaissance Location
The rudiments of the High Renaissance partly came from Milan (represented by the works of Leonardo), partly from Florence (the works of Michelangelo), partly in the regions of northern and central Italy and in Rome as a whole. Venice was full of its own artistic geniuses.
The Big Three Names
The so-called “Big Three” of the High Renaissance were Leonardo da Vinci, Michelangelo Buonarroti and Rafael Santi. Together they are attributed as the fathers of a new, dynamic, monumental and psychologically keen approach to the art of the High Renaissance.
Of course, this triad of talents deserves all fame, but they were not the only artistic geniuses of the Renaissance. There were many dozens, if not hundreds, of Renaissance masters.
Leonardo da Vinci
Born April 15, 1452, died May 2, 1519 (67 years old)
Leonardo da Vinci is perhaps the most famous Renaissance artist, known for his masterpieces Mona Lisa and The Last Supper. No other smile evoked as much speculation as the Mona Lisa. The young woman, Lisa del Giocondo, who was immortalized by Da Vinci at the beginning of the 16th century, has the most famous smile in the world. Many consider him one of the most talented and smart people of all time. The term “Renaissance man” (a man who does a lot of things equally well) is used today to describe people like Da Vinci. One of Leonardo’s famous creations is a drawing of the Vitruvian Man. This is an image of a person with perfect proportions, based on the notes of the Roman architect Vitruvius.

Michelangelo
Born March 6, 1475, died February 18, 1564 (age 88)
One of the contemporaries of da Vinci and, possibly, his contender for the title of the greatest artist of the Renaissance was Michelangelo di Lodovico di Leonardo di Buonarrooti Simoni. Michelangelo was born 13 years after da Vinci and followed in his footsteps as a man of the Renaissance. He was an experienced artist, poet, architect, and engineer. His most famous work is the sculpture of David, which was completed in the early years of the 16th century. The nearly 15-foot-high David depicts the biblical figure of David in white marble. Michelangelo’s other famous works include the Pieta statue and the ceiling of the Sistine Chapel in the Vatican. In the Sistine Chapel of the Vatican, he painted two of the most impressive murals in the history of Western art: scenes from Genesis on the ceiling and The Last Judgment on the altar wall. Michelangelo completed the magnificent frescoes on the ceiling of the chapel in four years. The composition occupies more than 500 square meters and includes at least 300 figures – this is, without a doubt, an unprecedented work of art, which for many years has influenced many artists of Baroque art.

Born in the spring of 1483, died April 6, 1520 (age 37).
Rafael is known as the third of the great masters of the Italian Renaissance. He was a young master, a brilliant assimilator and synthesizer of what was before. In his elegant manner, he combined many of the innovations of both Leonardo and Michelangelo, which partially justifies the latter’s posthumous judgment on Raphael: “Everything that he knew in art, he learned from me.” He was born in 1483, and his work was extremely influential even during his lifetime. Rafael lived to be 37 years old, but during his short life he created a huge number of works, including paintings, murals, prints and much more. One of his most famous works is the fresco Athens School. This is a classic example of Renaissance art and culture.