Symbolism of the most mysterious stone: Women with pearls in the paintings of famous artists 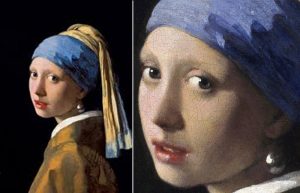 The dual nature of pearls has inspired artists at all times: pearls have been used for centuries as attributes of vanity, purity, innocence and even generosity. According to the National Gallery of Art, “symbolically, pearls were associated with vanity and worldly cares. Titian, for example, dyed Venus’s hair adorned with pearls. They can also represent purity, as can be seen from Lorenzo Lotto’s painting of St. Catherine.”

In 17th-century Dutch painting, pearls are depicted in earrings, necklaces and bracelets of heroines in portraits, historical paintings and vanitas objects. Perhaps the most famous painting with pearls is rightfully considered the “Girl with a Pearl Earring” by Jan Vermeer.
Jan Vermeer “Girl with a Pearl Earring”
This painting, known as the “Northern Mona Lisa”, represents the best creation of Dutch art. Jan Vermeer (1632–1675) – one of the most famous artists of the Golden Age of Holland. His refined painting technique, experiments with optics and perspective, the unique way of transmitting light and the poetic nature of his images remain unsurpassed in their originality and power of influence on the viewer. “Girl with a Pearl Earring” depicts the heroine in luxurious robes on a dark background, which at first glance seems inconsequential. However, Vermeer, the master of shadow and light, selected the background in such a way that it contrasts beautifully with the creamy skin of the model and translucent eyes. In addition to the exquisite blue-yellow turban, a large tear-shaped pearl earring hangs on the earlobe. Although at first glance this picture has the classic characteristics of a portrait, it is actually known as “Tronier” (a fantasy type of portrait depicting a type or temperament. That is, it is fundamentally not a portrait of a real person, although someone might well have been a model for her). The heroine of the picture seems to want to tell the viewer a secret, but what exactly will be hidden forever. As well as it will not be known who posed for Vermeer. Mysteriousness and secret meaning, the contrast of light and shadow, compositional laconicism and a special painting technique – all this characterizes Vermeer and the most famous painting he wrote “Girl with a Pearl Earring”.

Titian “Lady in White”
Tiziano Vecellio (Titian), the brightest representative of the Venetian school, used bright colors as his main instrument of expression in his work, including in his mysterious painting “Lady in White”. An attractive young woman in a white satin dress, decorated with gold, precious stones and pearls, for a moment stops fanning herself to meet her eyes with observers. Masterfully written light is reflected in her hair, the gleam of the dress fabric and the fiery blush of her cheeks and lips. A bright spot in the appearance of the model is a modest smile hidden behind bright scarlet lips. Secret always enveloped the personality of the model. Who is she? The daughter of Titian Lavinia, a beloved or idealized image of female beauty? In letters, the master of the Venetian Renaissance, Titian mentioned the elegant woman in the picture as his “most precious creature”, but the true identity of “Lady in White” remains a mystery to this day, which does not detract from the beauty of the canvas, but only adds to its charm.

Frans Hals “Portrait of Isabella Coymans”
In 1650, Frans Hals completed the portrait of Isabella Coymans with two strands of pearls on her wrist and neck, symbolizing the purity of a young woman. Hulse does not give up his favorite tool – sketchy application of paint with fast wide strokes, collecting entire areas of the picture with a relatively small number of wide strokes. The eye of the observer travels along the spacious lace, ribbons and other details of the dress to the charming face of the girl. The picture is filled with grace and charm. Frans Hals can be considered one of the great Dutch innovators of the beginning of the XVII century.

Nicholas Mas “Portrait of Anna Hofstrik”
The portrait of one of the last representatives of the Golden Age of Dutch painting by Nikolai Mas in the 1660s depicts Anna Hofstrik with exquisite pearls in her hair and neck. With one hand she holds her handkerchief, and the other lowers into the fountain, which indicates innocence.