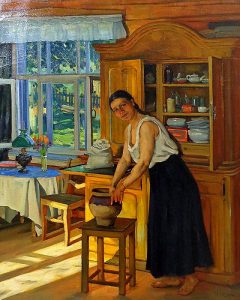 It is not often that fate favors artists with benefits at the same time in all areas of life. Few people manage to walk a life and career on a smooth road, without bumps and sharp turns. Konstantin Fedorovich Yuon is one of such minions of fate. He was lucky in his work, he was lucky in marriage … And what else does a creative person need? Today in the review is an amazing story of the artist’s tremulous love.

Konstantin Fedorovich Yuon (1875-1958) – Russian painter, landscape master, theater artist, art theorist, with the title of academician of the Academy of Arts of the USSR, national artist, Stalin Prize laureate. And if in a nutshell to characterize his artistic work, then Konstantin Yuon was an excellent master of urban landscapes and theatrical scenery. He painted portraits, portrayed Russian nature and monuments of ancient architecture, painted ancient provincial Russian cities and small villages. Well, of course, he devoted the lion’s share of his heritage to Moscow, where he was born, lived his whole life and loved immensely.

Yuon began his work with the golden shining domes of Russian churches, the place of which after the revolutionary events was taken by large-scale canvases depicting parades on Red Square.

A few pages from the biography

The artist’s father, a Swiss by birth, was an employee of an insurance company, and later its director; mother – German, was an amateur musician. In the large family of Yuonov, 11 offspring were born, who from motherhood absorbed an atmosphere of love for art. In particular, a large family loved music and theater. Therefore, they often arranged home concerts and performances, for which they themselves wrote texts and sewed costumes. The scenery for the performances, you guessed it, was painted by Kostya. He was seriously interested in painting from the age of eight, and became a regular visitor to the Tretyakov Gallery.

By the way, one of the brothers Konstantin in the future will become a famous composer, professor at the Berlin Conservatory. Kostya himself will enter the Moscow School of Painting, Sculpture and Architecture, where famous artists K. A. Savitsky and A. E. Arkhipov will become his teachers. Later, he will become a student of Valentin Serov, in the studio of which he learns all the sacraments of pictorial art.

And I must say that the career of the young painter began quite successfully. Even as a student at an art school, the novice master exhibited at student exhibitions, and his work already had considerable demand among art lovers. His paintings were well sold out, and Konstantin, even in his youth, could afford foreign trips.

And at the age of 25, Yuon opened a private studio, where until 1917, in parallel with personal creativity, he would teach young artists the art of painting, and after years he would become a teacher at the Surikov Institute. And in those pre-revolutionary years, among his students were the graphic artist Vladimir Favorsky and the sculptor Vera Mukhina, the Vesnin brothers and many other beginner talents of Russia. As it turned out, Konstantin Fedorovich was a born teacher. Also, the master was engaged in the design of performances, as we recall, he loved this business from childhood.

However, the artist received the greatest joy and inspiration in his family. Konstantin Yuon lived a long and happy life. For the most part, he had an extremely successful marriage. Although this love at one time had to go through considerable trials.

The artist’s wife, Klavdia Alekseevna, nee Nikitin, was an ordinary peasant girl from the village of Ligachevo, where 25-year-old Konstantin went to studies. Working once at the river in the open air, the young man saw a girl with a luxurious long braid climbing a mountain with a yoke. He immediately understood that it was fate. Having married a simple girl in great love in 1900, he never regretted it.

But his family did not accept the village daughter-in-law, and Konstantin tried for several years to reconcile relatives with his choice. The father considered this marriage humiliating, he could not even think that his son would dare to disobey him. Going against the will of the parent – a famous Moscow intellectual, the son chose love. And he, offended and offended, for several years avoided meeting and communicating with the rebellious heir.

And over time, everything fell into place – the beauty, spiritual generosity and kindness of Claudia Alekseevna overshadowed all class prejudices and made her a beloved daughter-in-law of the Yuon family. And the 60-year-old marriage of Konstantin Fedorovich with his beloved wife, Claudia Alekseevna, could be called absolutely happy, if not for the tragic death of the 17-year-old son Boris. Although, on the other hand, the general grief brought the spouses even closer.

Until the end of his life, until his last breath, Konstantin Fedorovich Yuon painted and was very active. At 82, he was even elected the first secretary of the Union of Artists of the USSR.

Well, what really is there – a minion of fate.