Sentimental paintings about the village children of Frederick Morgan 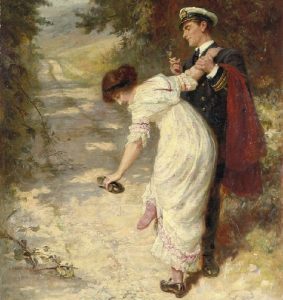 Today, lovers of sentimental painting are given the opportunity to get acquainted with the magnificent gallery of genre paintings by the English artist Frederick Morgan, who worked at the turn of the last two centuries and created a number of paintings dedicated to rural children.

The theme of children in the 18th century was very winning. These paintings diverged from the collections of wealthy art lovers with enviable speed. How could you not admire the images of cute angels: blue eyes, a sugar smile, sincerity, the desire to imitate adults in everything. And the fact that the plot canvases depicting the children of an English painter were very popular during his lifetime was quite natural.

Frederick Morgan was born in London in 1847. His father John Morgan was also an artist. At one time he graduated from the school of design, and later becoming a member of the Society of British Artists, he painted paintings on historical and biblical themes.

John, determined to make an artist out of his son, began to personally paint with him. And with these activities, the father laid a solid foundation for his son’s creative career. Years later, Frederick Morgan admitted: “Father taught me how to make pictures.”

Thanks to John Morgan, Frederick’s career began quite early. When the young artist was only 16 years old, having gathered courage, he sent his painting “Rehearsal” to an exhibition at the Royal Academy of Arts. The picture depicted two old musicians during a rehearsal of a rural choir. To our great surprise, they took the picture to the exhibition. Moreover, after the exhibition, it was bought by a well-known collector for £ 20.

After the first success, Morgan Jr. began to study with even more zeal. They started talking about him as “the only boy in Aylesbury – a true artist.”
However, three years later, the Society of British Artists did not qualify Frederick as an artist, and he had to look for himself in another profession.

The next few years, the young artist worked in a photo studio, making money by painting portraits of clients for whom photographs were not enough. Later, the artist recalled that it was a good school for him: such a work required great attention to the smallest details and scrupulousness. Having the skills of a painter, Frederick received numerous orders for portraits from photographs, which brought good income.

But the painting attracted Morgan Jr. with even greater force, and he decided to leave the shop and once again try to arrange his career as an artist. Turning to the plot painting, he creates many paintings, the characters of which are children.

Despite the fact that Frederick was an excellent portrait painter, he had considerable problems with the image of animals. Therefore, when he needed to depict dogs, cats or birds in the picture, Frederick turned for help to his friends – artists Arthur John Ellesley or Allen Saley, who were good animalists.

Fred Morgan was married three times. His first wife – Alice Mary Havers (1850-1890) was also an artist, she painted landscapes. In this marriage three children were born. Morgan’s eldest son also became an artist; he regularly exhibited his landscapes and portraits at the Royal Academy under the pseudonym Val Havers. From his second marriage, Morgan had two more children, one of whom also became an artist. Little is known about the third marriage.
Of course, five children and beloved wives constantly inspired the artist in his work, especially when he took up the theme of a happy childhood and motherhood.

The artist’s legacy also has magnificent romantic painting, where the artist clearly showed the relationship between couples in love.

I would also like to note that Morgan is not the only one who addressed this topic. The last few centuries, a children’s theme in painting in a special way began to excite many artists. Small people attracted them with their cheerfulness, sincerity and desire to imitate adults through games. Painters during this time created a huge gallery of subject paintings, which entered the world history of art dedicated to children. Some of them can be seen in the review: What the children played 150 years ago: Atmospheric paintings of world famous artists.