What butterflies meant in the paintings of world famous artists 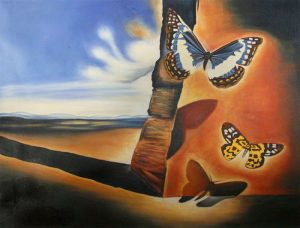 Butterfly and moth are one of the main symbols in art and a significant number of major artists include this image in their canvases. It is noteworthy that the butterfly in most allegorical phenomena is considered a symbol of the soul, immortality, rebirth and resurrection. Traditionally, people saw in this insect the ability to transform, transform as they were born, and transform from worldly caterpillars to a winged celestial being. In addition, the butterfly is a type of the Mother of God.

When an illustration or painting is intended to convey a fabulous or heavenly quality, artists usually include several butterflies in their work. This is what the American artist and graphic artist Winslow Homer did, actively using butterflies in his paintings, for example, on the canvas Girl with Butterflies, Fish and Butterflies, etc.

Osias Burt
More subtle images of butterflies can be found in such paintings as the still life of Osias Bert with cherries and strawberries in Still Life with Bread, as well as Still Life with Strawberries, Pears, Peaches, Shot Glasses and Butterflies. The butterfly was a symbol of salvation, while evil took the form of a dragonfly. Cherries and strawberries were considered paradise fruits and, thus, represented the souls of people.

Frida Kahlo
The most significant self-portrait of the Mexican artist Frida Kahlo was “Self-portrait with a thorn necklace and a hummingbird.” According to some art historians, Kahlo wanted to portray that she was resurrected and began a new life with this picture. Hummingbirds symbolize hope and good fortune in Mexican culture. However, viewers may notice that the black cat, known as a symbol of failure, takes its place behind Kalo’s right shoulder. Various interpretations suggest that the hummingbird pendant refers to Witsilopochtli, the Aztec god of war who hurts Kalo internally. Other important symbols of the painting were butterflies and a prickly necklace. Butterflies symbolize the resurrection, and this may relate to its revival in life after an accident. A prickly necklace can be a symbol of the crown of thorns of Jesus.

Vincent Van Gogh
Butterflies were also reflected in a series of paintings by the Dutch post-impressionist artist Vincent Van Gogh in 1889 and 1890. Van Gogh created at least four paintings of butterflies and one with a moth. The metamorphosis of a caterpillar into a butterfly was symbolic for Van Gogh as the ability of women to transform. In a letter to his friend Emil Bernard (June 1888), Van Gogh wrote: “… the ability to paint in the best conditions of another existence is, perhaps, no more complex and no more striking than turning a caterpillar into a butterfly. This artist’s existence is butterflies may be leaking on any of the myriad luminaries. ” Garden paintings with butterflies were painted in a shelter in Saint-Remy in 1888 after a mental disorder. Butterflies are perhaps the appropriate metaphor for the fragility of his tragic life.

Dosso Dossi
Returning to the Renaissance, we recall the picture of the Italian artist Dosso Dossi called

“Jupiter, Mercury and Valor” (1522-1524). Dossi was a court painter for the dukes of Este Ferrara and often painted with his brother Battista, who worked under Raphael. In this picture, the god Jupiter draws butterflies on canvas, but since he is a god, a simple act of drawing animates them.

Salvador Dali
Butterflies have been Dali’s favorite symbol since the 1950s. In 1956, this is a painting with Salvador Dali’s painting “Landscape with Butterflies,” which depicts two butterflies soaring in the desert. They look somewhat static, as if they don’t even flutter their wings. From the upper right corner comes a strong light source casting the shadows of butterflies, as well as casting a long shadow from the stone-shaped wall behind them.

James whistler
The famous butterfly of the American artist James Whistler first appeared in the 1860s in connection with his interest in Asian art. He studied pottery signatures on porcelain, which he began to collect and decided to depict a monogram from his initials. The JW monogram turned into a butterfly over the years, became Whistler’s calling card and its signature.

Antonio Pisanello
Another image of a butterfly found a vivid expression in the portrait of Ginevra d’Este by a prominent artist, one Italian quattrocento Antonio Pisanello, who entered the Louvre collection in 1893. The painting is typical for portraits of the early Renaissance. A fashionable dress and headpiece are carefully spelled out, together with a light feminine silhouette. A background depicting a flowering garden with fluttering butterflies plays a more decorative role than marks the beauty of nature.

William Adolphe Bouguereau
The largest representative of the salon academic painting, William-Adolphe Bouguereau completed the painting entitled “Cupid and the Butterfly” in 1888. The plot refers to the beautiful ancient myth of the god of love, in this case depicted as a little chubby Cupid and a light butterfly.