What impact do paintings of Savrasov, Levitan and other famous landscape painters have on people 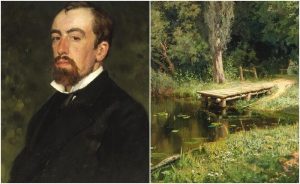 To understand these landscapes, one does not need any art education, no general erudition, or even knowledge of the name of the artist. The painting itself appeals to the viewer, causing in it long-forgotten or, on the contrary, carefully stored feelings, touches into some strings of the human soul, intimate, personal. But the emotions caused by mood landscapes nevertheless turn out to be similar to those that others experience when looking at these canvases. And also with those that once made the artist take up the brush.

What are mood landscapes, and thanks to whom they arose

When, when looking at the landscape, the heart suddenly contractes, grips grips, or, conversely, a feeling of happiness arises, when it seems that the picture almost conveys sounds, the freshness of the wind, cold or heat – this is the landscape of mood. This trend in the work of artists of the XIX-XX centuries began to highlight recently. Previously, the landscape did not play an independent role, becoming the backdrop for a portrait, biblical or historical subjects. But thanks to the departure from generally accepted standards in painting, the development of our own views on the role of works of art in human self-knowledge, the landscape began to develop, turning into an independent and promising genre.

For example, when speaking directly about the prison, hard labor side of Russian reality was difficult, the picture “Vladimirka” by Isaac Levitan, which depicted only a road going into the distance, could enter into a silent dialogue with the audience.
The immediate impulse to the appearance of mood landscapes should be considered the appearance of masters independent of the Academy of Arts, united in the Association of Traveling Art Exhibitions. And the instinct of the patron Pavel Tretyakov, who unmistakably felt the mood of the landscape and bought their canvases from the authors, was no less important, prompting him to continue to work in the same direction. So masters appeared in Russian culture, who created almost all of their works in the landscape genre of mood.

The mastery of such landscape painters did not boil down to an exact reproduction of the natural landscape or to capturing unique and rare natural objects – this is their difference from artists who made documentary authenticity their main task.
In these works, the state of nature at that moment in which it is captured on canvas was subordinated to one general mood, it reflected the character of the artist himself. In the mood landscapes, the personality of their creator is always visible, and the nature in them is depicted as it is seen by a person in a certain state of mind. This is achieved in various ways – compositional features, rhythm, “air” and “light”, saturation or sparseness.
In the mood landscapes, it makes no sense to look for “talking” details, symbols and riddles, the main, comprehensive idea is about the relationship of a person’s inner life with his surrounding nature.

One of the founders of the genre of “mood landscapes” is Nikolai Nikanorovich Dubovskaya, who chose painting classes contrary to family tradition. Born into a Cossack family, he was obliged to devote himself to military service, but while studying at the gymnasium, secretly, he constantly painted. By the age of seventeen, he had managed, not without the help of teachers, to persuade his father to give permission to study at the capital’s Academy of Arts.

Dubovskoy brilliantly proved himself during his studies, and after that, when he chose landscape painting for himself as the main genre of creativity, he managed to achieve recognition and success. Currently almost forgotten, Dubovsky was at the turn of the XIX-XX centuries, perhaps the most popular among landscape painters. In addition, he was one of the leaders of the Association of Traveling Art Exhibitions.
Being a romantic, Dubovsky and landscapes were perceived as a means for expressing the ideas of romanticism, when nature becomes an integral part of the personality, changing, struggling with everything rational and frozen. Dubowski’s works often feature an image of the sky, with which the sea can argue with respect to the degree of variation.

An anecdote from Dubovsky’s life has survived, when, going to his own wedding, he suddenly saw a stunning view from the window, grabbed a sketchbook and … forgot about time. The wedding, fortunately, still took place.
For the painting “Silent”, in which, according to Levitan, “you feel the elements”, Dubovsky was awarded the Big Silver Medal of the World Exhibition in Paris in 1900.

Alexei Kondratievich Savrasov, from a family of merchants Sovrasovs (the artist later changed his spelling of his name himself), also acted contrary to his father’s will, choosing the path of the artist for himself instead of commercial affairs. His work brought him awards and the title of academician, and finally Savrasov led the landscape class at the Moscow School of Painting.

He was one of the founders of the Association of Wanderers. Particularly popular was Savrasov’s painting “View of the Kremlin from the Crimean Bridge in inclement weather”, in which, according to contemporaries, an unusually truthful moment was conveyed – one could guess the movement of clouds and the noise of tree branches.