10 collectors whose investments in art are millions of dollarsThe richest people in the world spend billions of dollars in order to collect a decent collection of antiques and art. Each collector has his own taste and his own…

Unknown portrait of Da Vinci’s brush: Did the great master really write “Princess Leonardo” and whom he portrayed 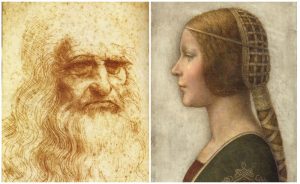 It may seem that the legacy of Leonardo da Vinci has many paintings – this artist, who died five hundred years ago, is mentioned too much and too often in the modern world. In fact, only one and a half dozen paintings by da Vinci and a few more works are known, whose belonging to Leonardo’s brush is only supposed. Therefore, any loss of the work of a great artist, as well as the sudden discovery of previously unknown, becomes a sensational event, affecting the history of fine art itself. Moreover, each such episode is reminiscent of a detective story, where there are victims, and criminals, and the hero revealing the secret, and most importantly – the priceless masterpiece of Leonardo.

How at the end of the 20th century another Renaissance masterpiece was discovered.

Once in 1998, a drawing was put up for auction at Christie’s in London. On a sheet of parchment about the size of a sheet of A4, a young girl was drawn in profile with ink and colored chalk. The seller of the drawing was the widow of a restorer from Switzerland named Jeanne Marshig. Later it became known that this work was owned by her husband at the time of their wedding, in 1955. The earlier history of the drawing is unknown. Christies experts defined the work as the work of a German master of the early 19th century who worked in the style of Nazarenes – artists who repeated the traditions of the Renaissance in their work.

The portrait was sold to the New York Art Gallery for $ 21,850. However, later the picture was bought by collector Peter Silverman, having already paid $ 19,000 for it. According to him, the image of a young girl at the auction sunk into his soul, and after the purchase, he began to attempt to find out the origin of the portrait. To establish the name of the artist, Silverman turned to several experts who, after a careful study of the drawing, including using the radiocarbon method and modern information technologies, suggested that his author was none other than Leonardo da Vinci himself.

The arguments were, firstly, that the drawing was clearly created with the left hand – this was indicated by the features of the hatching; the time of creation of parchment and paints was defined as the second half of the 15th century – the beginning of the 17th century. In any case, the talk was clearly not about the “German master of the 19th century”, but the great left-handed man of the Renaissance, whose name came to the minds of experts, was the great Leonardo. His authorship was indicated by other signs – traces of corrections and a fine drawing of details – which was typical of the Florentine artist.

In addition, a fingerprint was clearly visible in the corner of the drawing – and art historians recognized the similarities between this print and the fact that Leonardo left on “St. Jerome” in the Vatican. Having established all these circumstances, Professor Christina Geddo from Florence, Nicholas Turner, head of the engraving and drawing department of the British Museum, and Carlo Pedretti, director of the Heritage Studies Center of Leonardo da Vinci spoke in favor of Leonardo’s hand. Martin Kemp from the University of Oxford, who was initially skeptical of the find, later published a book with detailed argumentation that he found another of the portraits painted by da Vinci.

Who is depicted in the portrait?

It was with Kemp’s light hand that the girl in the portrait received the name “Princess Leonardo”. It goes without saying that the attention of researchers was immediately drawn to the personality of the girl, whom the artist portrayed.

The version appeared quickly enough. The fact is that the parchment on the left side retained cuts and holes that suggested that the drawing was once part of the book. It only remained to find her. A book with a missing page was found in Warsaw, where one of the Sforziades, print media containing panegyrics addressed to Francesco I, the founder of the Milan branch of Sforza, was stored in the National Library of Poland. The book consisted of parchment sheets of exactly the same size as the drawing, and in addition, it clearly lacked one page, immediately after which the wedding of Bianca Sforza and Galeazzo Sanseverino was mentioned.

So the girl’s personality was identified in the portrait: it was this illegitimate daughter of the Duke of Milan, Lodovico Sforza, who was subsequently legalized. Leonardo painted a portrait before her wedding in 1496, after which Bianca did not live very long, having died either from an ectopic pregnancy or from childbirth. Apparently, Bianca belonged to the “Sforziada” with her portrait, after which she transferred to her cousin Bonet. In the figure, the girl is dressed in the fashion of Milan at the end of the 15th century, her hair is laid in the same hairstyle that adorns the “beautiful Ferroniera” by da Vinci.

Posted in collections, combining, considered, demonstrate, reminiscent, successful, Uncategorized
vegetables hummingbird natural landscape luxurious vase cities in those all confidence founders symbol of power important subject wastefulness having secured ordinary people established a republic huge collection quantitative terms expression sprawling endless sophistication among the owners examination lamented that expressiveness before breaking exhibitions were voluminous scenes several museums raised children inexpensive miniatures various countries voluminous styles slightly upturned insistence artistic geniuses country under the features long and happy with clouds three guys fragile figurative considerable problem extremely important this nickname the cortex many conceptual mysterious smile convince him sophisticated technique from a technical expectantly reproductions their marriage most famous visual impression background portrait resemblance
Secrets of "Ladies with an Ermine": What does the cute animal in the painting of Leonardo da Vinci hide"The Lady with the Ermine" (1489-1490) is one of the most important works of all Western art, the subject of the greatest rarity of the genius Leonardo da Vinci and…