“Love Letter” by Jan Vermeer: Why the lute is central to the picture 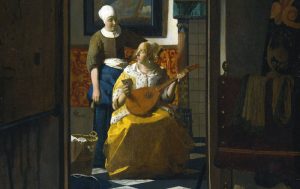 At the first glance at Jan Vermeer’s famous painting “Love Letter”, the name seems far-fetched, because the letter itself is hardly noticeable. But the lute in the hands of a woman plays a much more significant symbolic role. What does the letter contain? And what does the lute matter in the picture?

Genre painting
The paintings, which allow the observer to look at the everyday life of the depicted people, were especially popular in the XVII and XVIII centuries. They are called genre paintings, and Dutch genre art occupies an undeniable place at this stage in the history of art. A particularly popular topic was symbolism. Pictures depicting love letters can be attributed to a separate category of genre painting. Artists such as Jan Vermeer, Gabriel Metsu and Samuel van Hoogstrate have contributed to the world of art with canvases of this plot.

A glimpse of secrecy
The scene depicted resembles a keyhole. Darkness combined with light from a distance creates an optical illusion of spatial relief. Diagonals on the checkered floor give the impression of depth and three-dimensionality. An open door, a curtain overhead, an arbitrary composition of not very attractive everyday objects in the foreground give the impression of complete surprise, as if the spectators of this picture are intruders who took the heroes by surprise. There is something conspiratorial in the manner of both women. And the reason is in the letter.

Heroines paintings
In all likelihood, the situation in this woman’s house is deeply personal. A richly and elegantly dressed woman looks expectantly at the servant who has just handed her a letter, interrupting the game on the lute. The servant’s smile, when she looks at the seated mistress, shows her some superiority. The hostess is clearly surprised, she looks uncertainly at the maid, her visit almost frightened the woman. What is this letter? Is this really the same thing that a woman has been waiting for? The fact that the letter is a love letter (by the name of the picture itself) is proved by several symbolically significant objects. First of all, this is the lute itself – a popular symbol of love, meaning the harmony of two people. We will return to this tool. Secondly, the seascape on the wall behind them. According to art critics, the ship in the picture is associated with the motive of the groom as a ship in a calm sea of ​​love, waiting to meet his lover (like a ship searching a harbor). This symbolism is taken from Ian Harmens Krul’s book “Emblems of Love”, in which he compares love with the sea because of its “variability”. The letter is undoubtedly from a loved one, who is currently far from home.

The lute has a special place in the history of art. The symbolic meaning of the lute in the 17th century is part of the general musical metonym: it conveys some message about romance. In Renaissance painting, it is an attribute of personified Music (one of the seven free arts), Hearing (one of the five senses), Polygynia (one of the muses) and the usual instrument of angels. The lute is a traditional instrument of lovers. Sometimes the lute is an instrument of Orpheus and Apollo. The lute was also an important component in vanitas painting, which represented the futility of pleasures. On the canvas of Jan Vermeer, the lute is an attribute of trembling and tender feelings.

Light and color in the picture
In addition to subtly conveyed allegories, Jan Vermeer is also highly appreciated for his effective and accurate use of light. It is not without reason that he is called the “wizard of light.” Using light, it convincingly displays the space inside the room. Historians believe that Vermeer used several methods to see how light is reflected in a room. Techniques that he used include mirrors and a pinhole camera.
We can say that the Dutch painter managed to get ahead of time in the use of color. He effectively used colors to create the mood he needed. In this case, he filled the quiet, calm and personal scene with neutral and dark colors, such as gray, brown, dark blue shades. As for the shadow, unlike most of his colleagues, Vermeer understood that the shadows should not just be dark gray. Instead, they were a mixture of neighboring colors. Italian artist Caravaggio directly influenced Vermeer’s use of chiaroscuro, a popular Baroque technique in which light and shadow contrast sharply with each other to improve composition. The freshness of yellow and blue, beautiful processing of light and subtle nuances of color in garments and shades in the interior – an unmistakable work of the master.

Brooms and slippers play not only compositional significance (they separate the viewer from the experiences and secrets of the heroine), but also play an important symbolic role, especially since the artist placed them in the foreground. Slippers here reveal illegal love (love outside of marriage). The broom depicted on the domestic scene may indicate that the marriage has been forgotten or delayed. And finally, “marry a broomstick” is a term meaning a couple out of wedlock.