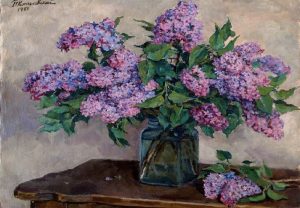 Not many painters who disobeyed the socialist regime in times of bloody repression managed to escape punishment. Today I would like to recall the name of one of them – Pyotr Petrovich Konchalovsky. In those terrible years, the artist managed to remain a “pure” painter who avoided the embodiment of socialist reality and portraits of its leaders in his creations. Moreover, to take as a basis for his work the direction of the hostile Western art, which is why he was named in his time – the Soviet Cezanne.

It should be noted that the great merit of Anatoly Lunacharsky, the first People’s Commissar of Education of the RSFSR, was that Pyotr Petrovich was allowed to create freely, despite the attacks of critics who longed for the proletarian coup and the ecstasy of socialist work in the artist’s works. Anatoly Vasilievich convinced the guardians of the dogmas of socialist realism that Konchalovsky in his modern day “sings the poetry of our everyday life” and, apparently, the People’s Commissar did quite well.

In reality, Pyotr Petrovich Konchalovsky managed to live an amazing life full of paradoxes and reverent love … The only life he went through was the only woman, the mother of his children, to whom he was not only a father, but also a true friend and a demanding educator. And at a time when many creative people who could not accept the revolution emigrated, and the remaining ones tried to adapt to the realities of Soviet reality, he, Pyotr Konchalovsky continued to live in Russia and paint his famous still lifes with lilacs, portraits of his relatives, friends and just handsome people, not delving into the harsh realities of everyday life for him today.

At one time there was even a legend that Konchalovsky refused to paint a portrait of Stalin, justifying his refusal by the fact that he was a realist and did not paint portraits from photographs. In fact, Pyotr Konchalovsky did not refuse, but only asked the party worker: “When can I meet with Joseph Vissarionovich for the first session?” He immediately lucidly explained to him that there was no question of a personal meeting with the leader and that “father of the people” will need to write on the photograph. To which Konchalovsky sincerely spread his hands and lamented that, alas, he could only write from nature, but unfortunately he was not trained in the photo.

This answer was not only bold, but also bold. But everything worked out, and in the course of time Petr Petrovich will become a laureate of the Stalin Prize. Paradox. Say … and you will be right.

A few pages from the artist’s biography

Petr Petrovich Konchalovsky (1876-1956) – the son of a hereditary nobleman, publisher and translator was born in Slavyansk, Kharkov province. The boy’s talent for drawing was manifested from an early age. Peter the Younger received his first art education at the Kharkov School of Drawing. But at the insistence of his father he was forced to enter the faculty of natural sciences at Moscow University. However, soon the future artist, realizing his true purpose, leaves his studies at the university and is completely immersed in painting.

At that time, thanks to the publishing work of his father, Peter was already familiar with famous domestic artists – Vrubel, Surikov, Korovin, Serov, Levitan, Repin, Vasnetsov. And it was completely no wonder that spinning in such a highly artistic environment, the young man was completely absorbed in art.

In 1896, young Konchalovsky, on the recommendation of Korovin, goes to Paris and becomes a student of Laurence and Benjamin-Constant. And returning to Russia, the aspiring artist decided to enter the St. Petersburg Academy of Arts. However, his creative passion did not last long: the academic institution aroused a feeling of deep disappointment in him. He leaves the Academy and goes as a student to the workshop of battle painting by Pavel Kovalevsky, where he will try to find his own manner and style.

At 26, a young artist marries the daughter of the artist Vasily Surikov. Lyolechka, as Pyotr Petrovich called his wife, was very lucky with her husband, and their children with her father. Konchalovsky devoted himself entirely to his offspring: he personally put his son and daughter to bed, telling tales and singing lullabies, he sat tirelessly at their bedside during illness, took him for walks and, of course, taught him to draw. The main task of Lelechka was to love, inspire and be the main critic and model of her husband. She also did homework, took children to classes, taught music and foreign languages.

Konchalovsky understood that among the galaxy of such well-known contemporary Russian masters of painting who worked at the break of two centuries, he was unlikely to stand out. Therefore, in search of his own direction in creativity, he again goes abroad. This time to Spain, where he discovers post-impressionists. Konchalovsky was hurt by the work of Van Gogh, Cezanne, Matisse, whose influence is very obvious in the artist’s early works. If I may say so, then Konchalovsky as a painter was born in Spain.