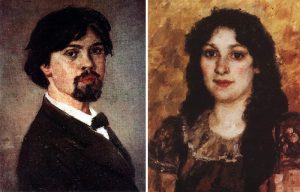 The personal life of prominent people always attracts the attention of readers, especially if it is full of piquant details, incredible stories, secrets and mysteries. But today we will talk about the personal life of the artist Vasily Surikov, about which not so much is known. But the amazing story of his love will not leave anyone indifferent.

A bit from the biography

Artist Vasily Surikov was born in Krasnoyarsk, his ancestors were from the Don Cossacks who conquered Siberia with Ermak, after the death of which they went up the Yenisei and founded the Krasnoyarsk prison. The artist was born in 1848 in the family of an office clerk who came from an old Yenisei Cossack family. And is it necessary to say that the character of the future painter, formed in the harsh environment of the Siberian region, was just as strong and unshakable. Years later, this power was embodied in the heroic images of his paintings.

Little Vasily early became interested in creativity, and he often got from his mother for painted furniture. The first painting lessons were received by him at the county school. Later, the governor noticed a talented young man and decided to send him to study at the Academy of Arts in the capital itself.

However, 20-year-old Vasily Surikov, who came from Krasnoyarsk to St. Petersburg for admission to the Academy, failed the exams with a bang. One of the members of the selection committee, seeing Surikov’s work, said: “Yes, you even have to forbid walking past the Academy for such drawings!” Vasily did not go past the Academy for a short time — only one year, and then successfully passed the entrance exams and became one of the best students. In 1875, after receiving a certificate, the Council of the Academy of Arts awarded Surikov the title of first-class artist, later he was awarded a gold medal and the Order of St. Anna of the III degree for his creative work.

The love of the artist’s life

Once, when once again Vasily entered the Catholic Church to listen to the sound of the organ, he met his first and only love in life – Elizabeth Shara. The girl was from a French-Russian family. Her father, Auguste Charet, in his youth, falling in love with the Russian girl Maria Svistunova, moved from Paris to Russia, converted to Orthodoxy and got married. Five children were born in their marriage: a son and four daughters, who were raised in the French manner.

Therefore, Lilya (the so-called young lady was called native) spoke Russian with a slight accent. She, like Vasily, was interested in music and painting. The girl was then nineteen years old, and Surikov – twenty-nine. And despite the fact that the young artist was ten years older, during their meetings he blushed and was embarrassed, like a young man.

At the end of the Academy of Arts, the aspiring painter received an order for four paintings for the Cathedral of Christ the Savior. For some time, preparing sketches, Surikov worked in St. Petersburg, and then he had to go to Moscow. Lovers had a long separation. However, on weekends Vasily raced on the wings of love to Petersburg and, having been with his beloved for several hours, returned back.

The days of separation were painfully flowing, and the artist, populous Moscow, seemed deserted without a beloved girl. Therefore, having finished work in the temple and received a fee, Vasily decides to marry immediately. He makes an offer and they get married with Lily. The painter decided not to inform his mother about his marriage, as he probably knew that the sophisticated French daughter-in-law would not like the harsh Siberian Cossack.

Elizabeth Avgustovna was a good-natured, pleasant in communication, very beautiful woman. Like her husband, she shunned social gatherings, feeling awkward in a large society. “Everyone spoke of her as an angel,” recalled daughter Olga later.

After the wedding, the newlyweds settled in Moscow and healed, albeit poorly, but happily. Surikov went to free bread, he never wrote to order again, but only what his heart commanded. The young wife lived in the interests of her husband, saving him from all household chores and literally creating home comfort from nothing. And Vasily was immensely glad that his Lily from a pampered young lady turned into a real mistress of the house, learned to manage the house and cook. Soon, the two Surikovs had two daughters, and the young mother learned, among other things, to sew beautiful dresses for her daughters.

The artist’s life was overshadowed by only one circumstance – a congenital heart disease of his wife, who had developed rheumatism early, and it was very difficult for her to endure even a simple cold. And Vasily himself almost died of pneumonia in the first year after his marriage. Only thanks to the care of his wife, who did not leave him one day around the clock, he survived. Doctors had already lost all hope of his recovery, and only shrugged. Surikov knew that he survived only thanks to his beloved Lily.

Barely recovering, the artist took up the work. He wrote many female images from his wife, calling her the “ideal model.” He created several of her portraits.