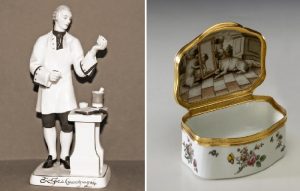 Russia has always been famous for outstanding talents, however, the indisputable fact is that these people did not always have sweet and free in their homeland. Russian history remembers many geniuses whose life was ruined by the domestic system. A terrible fate fell on the lot of Dmitry Ivanovich Vinogradov, rightfully considered the father of Russian porcelain, who spent the last days of his life chained to a kiln.

A master was born in the ancient Russian city of Suzdal in 1720. In the early 1730s, the boy’s father, seeing his great inclinations for science in his son, sent him with his elder brother Jacob to study in Moscow, where they studied at the Spassky School at the Slavic-Greek-Latin Academy. I must say, this school was one of the most authoritative educational institutions of the state of that time. At one time, many outstanding personalities studied in it.

It was there that fate brought together two future geniuses – Dmitry Vinogradov and Mikhail Lomonosov. Despite the nine-year age difference, they became good friends. An irresistible desire to study, dedication and talent for the natural sciences helped Dmitry quickly catch up with Lomonosov, and then pass three classes with him together in one year.

At the end of 1735, the brothers Vinogradov and Mikhail Lomonosov, among other gifted twelve students, were sent to St. Petersburg to continue their education at the Imperial Academy of Sciences.

And not a year has passed, like Dmitry Vinogradov, Mikhail Lomonosov and Gustav Ulrich Reiser, as excellent students are sent from the academy to study in Germany. Just think about it: a boy at the age of sixteen, at the suggestion of the Secret Cabinet of Ministers, at the suggestion of the St. Petersburg Academy of Sciences, by decree of the empress – as one of the best!

With his genius and desire for study, Dmitry was distinguished by “… and indomitable disposition, and violent behavior, and wastefulness, as well as a passion for revelry.” But along with this, he devotedly studied everything that fascinated him. Realizing that a theory without practice does not cost anything in itself, he traveled through the mines of Germany, getting acquainted with the construction of mines, the operation of mechanisms. Often he worked in these mines himself.

Having gained tremendous experience, enlightened Dmitry Vinogradov returned to Russia, where he was immediately examined by the Berg-collegium headed by the president of the institution V.S. Riser. Having taken the exam from a talented technician, Raiser noted that he could not name a single European master who could understand his business better than Vinogradov. After that, the newly minted mining specialist was awarded the rank of Bergmeister, giving the right to dispose of work in mines. However, Dmitry Ivanovich did not get into the mines …

Empress Elizaveta Petrovna, having heard about Vinogradov’s unprecedented talent, ordered to leave him in Moscow and sent to Porcelinovy ​​manufactory to carry out a secret business – the creation of porcelain production in Russia.

Even Peter I tried to organize the production of domestic porcelain, realizing that in order to become a European state, in addition to military victories, you need to achieve an ideological one. During the life of Peter, this could not be done, but the desire of the father was completely embodied by the Empress Elizabeth. In 1744, according to her decree, the Porcelin manufactory was created – the first in Russia and the third in Europe. However, opening is not enough; it was necessary to produce products on it. And how to make porcelain in Russia then no one knew yet. By the way, they could only dream about it in the Russian Empire, since the recipe of already manufactured Chinese and European porcelain products was kept in the strictest confidence.

In 1747, Dmitry Ivanovich began work on the creation of the coveted recipe, through numerous trials and experiments. And in order to unravel the recipe for making porcelain, Vinogradov had to make a real labor feat. From day to day, from year to year, he conducted experiments with clays of various deposits, changed the conditions of firing, he designed the furnaces and put them into operation, until he achieved what he was striving for. And in order not to lose the results obtained by numerous experiments, and his successors did not have to “look again at the sweat of his face”, the discoverer outlined his experiments in a handwritten work diary, resorting to encryption. These records were kept in a mixture of Latin, German, Hebrew, and other languages.

And curiously, Vinogradov managed to discover not only the secret of porcelain manufacturing, but also to explore various domestic clay deposits. The instructions outlined the technology of washing clay of various types. The master selected the most optimal type of fuel for firing products, he designed special furnaces and furnaces, and then supervised their construction, he himself discovered the formulas for paints and glazes for painting. At the same time, Vinogradov was engaged in training, he trained specialists, assistants and successors of various levels in the manufacture and decoration of porcelain.