Poor rich girl: Why actress and designer Gloria Vanderbilt considered herself guilty of the death of her son 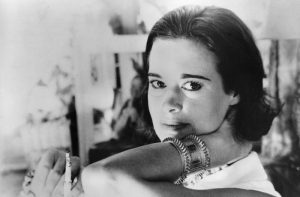 Gloria Vanderbilt was one of the most famous women of the twentieth century. She was able to succeed in various fields of activity: she acted in films, wrote books and paintings, and also became a designer of blue jeans. Not one of her exits has been left without the attention of journalists since the very day she was born. She seemed successful and successful, but at night she was tormented by nightmares, and for many years Vanderbilt blamed herself for the death of her own son.

On February 21, 1924, many newspapers wrote about a happy event in the life of Reginald Vanderbilt and his second wife, 20-year-old Gloria Morgan: on the eve of the spouses, an heiress, Gloria Vanderbilt, was born. Gloria Jr. was only one year old when she inherited her father’s 5 millionth fortune. 45-year-old Reginald Vanderbilt died of cirrhosis, and his widow took charge of her daughter’s finances.

Needless to say, the young Gloria Morgan, having endured mourning for some time, plunged into secular life with her head. She often went to Europe, loved to be in Paris, where she would certainly take her daughter and her nanny Dodo. Sometimes they were also accompanied by Gloria’s twin sister, Telma Morgan.

Such an idle lifestyle categorically did not like the sister of Reginald Vanderbilt Gertrude. At first, she tried to reason with her brother’s widow and draw her attention to her daughter, but the young woman did not react to the words of Gertrude Vanderbilt Whitney. Then the founder of the Museum of American Art Whitney decided to take up the education of her niece herself.

The trial of establishing custody of Gloria Vanderbilt in 1934 was loud and debilitating for all of its participants. Even the judge who led the case was often forced to interrupt the meeting because of the inability to work in the hall, where they constantly shouted and sorted out the relationship.

The main role is that Gloria Morgan lost and was forced to come to terms with the fact that from now on her daughter will be raised in the family of her husband’s sister, 10-year-old Gloria Vanderbilt herself played. Turning to the judge, the girl asked her mother to tell her to stop spending her money.
The trial was widely covered in the press, and baby Gloria was called a poor rich girl. It seems that this nickname left its mark on the whole future life of the rich heiress.

Gloria Morgan managed to get used to a luxurious lifestyle in a few years, and moving to her sister’s house, where she lived until the end of her days, was hard for her. No one forbade her to see her daughter, but all the meetings were supervised by one of the girl’s paternal relatives. Gertrude Vanderbilt feared the influence of her brother’s widow on the girl.

Gloria lived in the house of Gertrude Vanderbilt, and after reaching 17 years, decidedly went to Hollywood, hoping to subdue him on the first try. Noting adulthood, Gloria took control of her father’s inheritance. But she refused her own mother financial support. However, the relationship between the two closest people has been strained ever since Gloria Jr. spoke in the courtroom.

And yet one day Gloria Morgan told her daughter that she should change. She advised Gloria the Younger to repent to avoid God’s punishment. And she added: the punishment will surely follow, only by no means immediately, but only when the daughter grows up and becomes a mother herself.

Many years later, Gloria Vanderbilt remembers these words of her mother and is horrified that she did not hear her.

Hollywood did not immediately submit to the rich heiress, but personal life from the very beginning glorified Gloria in a whirlpool of meetings and loves. She was married four times, divorced three times and buried one of her husbands.

The first marriage of the beautiful woman with the agent Pasquale DiChicco lasted only 4 years and ended in a scandalous divorce. Gloria accused her ex-husband of assault and very quickly tied the knot again, this time with conductor Leopold Stokowski. Despite over 40 years of age difference, the couple lived together for ten years and became the parents of two boys, Stanislav and Konstantin.

Less than a year after the divorce from Leopold, Gloria was already walking down the aisle again. Now her chosen one is director Sidney Lumet. It was a strange family: the couple violently sorted out the relationship, passionately reconciled, and then quarreled again. Such a pass of passion was impossible to endure for a long time, and in 1963 the family ceased to exist.

But this time, Gloria Vanderbilt did not enjoy solitude for long. Just a few months later, she regained the status of a married lady, combining a legal marriage with writer Wyatt Emory Cooper, who became the father of her two sons, Carter and Anderson. Unfortunately, the fourth husband of Gloria, who had a heart condition, died in 1978 right on the operating table.

What butterflies meant in the paintings of world famous artistsButterfly and moth are one of the main symbols in art and a significant number of major artists include this image in their canvases. It is noteworthy that the butterfly…