Giuseppe Arcimboldo – a phenomenal artist of the 16th century 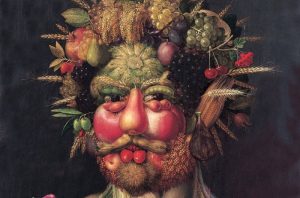 This year marks almost 430 years since the death of Giuseppe Arcimboldo, an Italian artist known for his original portraits of fruits, vegetables, flowers and fish. Giuseppe so skillfully portrayed these objects on canvas, that their entire combination forms a recognizable similarity of portrait subjects. The art of Arcimboldo, as the most radical and extravagant representative of the mannerism style, is also noteworthy in that he pushed the theme of the parallel between humanity and the natural world beyond new boundaries.

The genre of portraiture has been one of the dominant for many centuries. However, in the 16th century, Giuseppe Archimboldo provided his own vision of this genre, combining it with a still life and surprising his contemporaries with his extraordinary compositional solutions.

Archimboldo’s paintings were complex compositions, rich in both paradox and allegory. Given Giuseppe’s strange idea of ​​the human figure, there are disputes among a number of art critics about whether the master’s paintings are the result of an insane mind or are inspired by the Renaissance, known for its riddles, symbols and innovations.

Arcimboldo began to create these bizarre works of art, working under Emperor Maximilian II. As a gift to the ruler, Archimboldo created two of his most famous series: “The Seasons” and “Elements”. Maximilian actively encouraged the work of Archimboldo, giving the artist access to his collections of rare flora and fauna so that he could create fantastic faces from the natural patterns that he observed. Transmitting the different seasons through the images of human forms, these four-part collections demonstrate his creative approach to representing and personifying nature.

His series of paintings “Four Seasons”, in which shift seasons were depicted as a series of portraits made up of seasonal plants, was especially popular. Maximilian II liked them so much that he ordered a second set from Archimboldo in 1573 as a gift to Augustus, Elector of Saxony.
This series of paintings is a vivid manifestation of mannerism, which emphasizes the close relationship between humanity and nature. Each picture represents one of the seasons and consists of those objects that characterize this particular time of the year.

⦁ Spring is a smiling young woman. A close examination shows that her skin, hair and clothes are just an illusion, and that the woman actually consists of petals and stems of spring flowers, which are presented in the smallest details. Her face consists of pink and white flowers with a lily bud nose and a tulip ear. Her hair consists of a magnificent array of colorful flowers, and her dress is a collection of green plants and a white ruff with flowers.
⦁ Summer consists of seasonal fruits and vegetables, whose bright colors stand out against a dark background. A smiling face convinces the viewer of the warm goodwill of the equally warm sunny season. On a wide, stiff collar, the artist delicately wrote the words “Giuseppe Arcimboldo – F.” F stands for fecit (“he did it”). This is the master’s way of verifying the authenticity of his work of art. On the shoulder is the date of painting in 1573.
⦁ Autumn shows a person whose body is a broken barrel, and the face consists of a pear (nose), apple (cheek), pomegranate (chin) and mushroom (ear), all ripe before breaking. This is the head of a rather solid adult guy and consists of autumn items. Autumn shows fertility.
⦁ Winter is the last picture in the Four Seasons series, which Archimboldo painted in 1573. This is an old man wrapped in a straw mat (a thick straw rug protects the old man from the cold), with cracked bark (wrinkled skin), partially separated from the tree, broken branches and a swollen mushroom (mouth). His eye is already hidden in a deep crack in the cortex, and his ear is nothing more than the remnant of a broken branch. However, the winter at Arcimboldo is not so severe: there is also an element of comfort. An orange and a lemon hang on a broken branch: with their luminous flowers they give warmth to this bleak atmosphere. If you look closely at the mat, we can notice the coat of arms. That is how the artist indicated the customer of the picture – the Emperor.

Emperor Maximilian II liked these series of paintings so much that he ordered a second set in 1573 as a gift to Augustus, Elector of Saxony. As another expression of his appreciation, the Emperor took part in the festival in 1571 under the direction of Archimboldo, in which he and other members of his court were dressed in the images of the seasons.

In addition, four portraits in the later series “The Four Elements” by Arcimboldo (1566) – Air, Fire, Earth and Water – correspond to spring, summer, autumn and winter, respectively. The overall effect of these two series is that the Holy Roman Emperor Maximilian II (who ordered both sets of paintings) affects everything on earth up to its natural forces.