Transformation of the picture
To date, only a small part of the picture has remained genuine, the rest has been repeatedly retouched: the entire background was darkened, the dress was changed, and the transparent veil worn by the woman was repainted in combination with hair color. Another adjustment of the unknown restorer was the addition of dark shadows between the fingers of her right hand (upon careful examination of the two lower fingers it is noticeable that they are significantly inferior to the others). However, the most important discovery of the picture was that the Italian artist did not write the work in one stage, but in three clearly distinguishable stages. END_OF_DOCUMENT_TOKEN_TO_BE_REPLACED 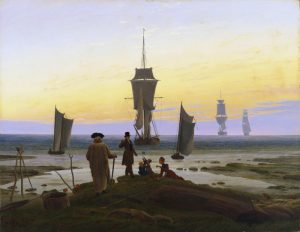 Human helplessness and melancholy, high feelings of the hero in the paintings are caused by sad events in the life of the artist himself. By coincidence, Frederick knew death very early: his mother, Sophie Dorothea Behli, died in 1781, when Caspar was only seven years old. At the age of thirteen, Caspar David witnessed how his brother Johann Kristoffer fell through the ice of a frozen lake and drowned. According to some reports, Johann Kristoffer died, trying to save Caspar David, who also nearly drowned. His sister Elizabeth died in 1782, and the second sister, Mary, died of typhus in 1791. Sad circumstances with loved ones, as well as the immersion of the artist himself in spiritual and mystical poetry, influenced his work and served as the basis for the confirmation of Caspar David Friedrich as the leader of German romanticism. END_OF_DOCUMENT_TOKEN_TO_BE_REPLACED 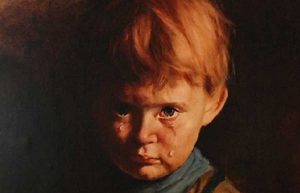 Bruno Amadio (Giovanni Bragolin) was born in 1911 and lived a fairly long life, leaving a number of art paintings that depict crying children. Despite the fact that the artist lived in the last century, very little information has been preserved about him. After his life, there were practically no personal photos left, he never gave interviews to journalists, art historians did not write their reviews about him. It is only known that in the war years he was a member of World War II, who fought on the side of Mussolini. At the end of the war he moved to Spain, and already there he changed his real name from Bruno Amadio to Giovanni Bragolin. Later he lived and worked in Venice, was a restoration artist. END_OF_DOCUMENT_TOKEN_TO_BE_REPLACED