Was there a boy, or what they argue about for many years, looking at Chardin’s picture “Prayer before dinner” 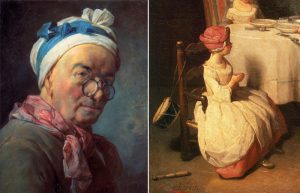 He was called the “artist of animals and fruits.” He had a significant influence on Henri Matisse and Paul Cezanne. In art, this artist sought naturalness and humanity as opposed to the official Rococo style. All this is about Jean Baptiste Simeon Chardin and his picture “Prayer before dinner.” What is the main debate of art critics about this picture?

The 18th century French artist Jean Simeon Baptiste Chardin was known for his still lifes and genre paintings. His refined and realistic style had a significant impact on a number of the greatest artists of the XIX-XX centuries, including Henri Matisse (1869 – 1954) and Paul Cezanne (1839 – 1906). Chardin’s canvases were simple, but workshops performed. The Chardin world is a world with feeling (and not gallantry), with humility (and not vanity), with simplicity (and not covetousness). For the bourgeois establishment, the works of Chardin represented a salutary contrast with the “decadent aristocratic fragility” of many of the artist’s colleagues (including Watteau).

Animal and fruit artist
The works that brought him recognition – “La Raie” (“Ray”) and “The Buffet” (“Buffet”), demonstrate his realistic ideas and confirmed him the status of “artist of animals and fruits.” From here, Charden developed his still-life skills. He once said about painting: “We use colors, but we paint with our feelings,” and for him still lifes had their own lives. As the French writer of the XIX-XX centuries, Marcel Proust (1871-1922) wrote: “We learned from Chardin that the pear is alive as a woman, and an ordinary ceramic object is beautiful as a gem.” Further growing love for painting genre works. His works have gone a long evolutionary path from a simple still life to everyday scenes of everyday life in French society. The artist’s successful reputation led to a profitable acquaintance with King Louis XV, to whom Chardin presented the painting “Prayer Before Dinner”.

The plot of the picture
Representing the everyday scene from the life of an ordinary French peasant family of the third estate, Chardin spares no lyrical tones and emotions embedded in the picture. Sensuality and emotionality were the creative credo of this master. In the first place is labor, tenderness, piety. On the right is such a homely and simple mother figure. She sets the table while teaching her children how to pray. The viewer caught the moment when the mother stopped to look at her youngest child and to listen to every word of his first prayer. The touching detail – the game is interrupted (as if the drum had just been hung on the back of the chair), all the plates are already full of soup, but you can’t start the meal until the prayer ends. Most likely, these are the first independent words of the prayer of a young child.

The face of the praying baby is hidden from the viewer. Only chubby cheeks and a slightly upturned nose are visible. The child’s light dress almost blends in with the color of the tablecloth. Chardin managed to achieve amazing penetration and warmth, homeliness and calm joy in Prayer before Dinner. This was done with the help of the aspirational and connected glances of all the heroes of the picture: both the elder sister and mother look with tenderness and patience at the youngest child, who, in turn, follows the instructions of her mother (apparently, she repeats the words of prayer). The older sister says a prayer – her folded arms are visible above the edge of the table.
The main thing here is not the history of the cell of society from the third estate. No. The main thing here is the uniquely recreated atmosphere of a homely spiritual moment. Prayer before a meal in Christianity for a long time preceded a meal, but today this custom is almost forgotten. Its text is simple and largely free. These are just a few words of thanks to the Lord for the food given. The depicted magical atmosphere and soft light create a sense of ritualism and holiness, like the atmosphere in a monastery (from where the tradition of thanksgiving prayer before eating came).

Boy or girl
The controversial moment and the real mystery in the picture is the gender of the child – still a boy or a girl?
A number of art historians believe that this is still a boy. The fact that he is wearing a dress should not be embarrassing. These are the usual clothes of young children in the 18th century. For example, the modern American culturologist Karin Calvert argued that the tradition of dressing a little boy in a dress existed until the end of the 18th century: “Boys, before putting on a man’s suit, went through three clearly defined stages: the first 3-4 years in skirts, the next 3-5 years – in children’s pants and another 2-3 years – in a slightly lightened version of an adult costume. ” The second additional argument in favor of the male child is a hanging drum (a toy that is played mostly by boys).