How the primitive paintings of Grandma Moses influenced the course of the Cold WarHaving crossed the age limit for 60 years, many no longer expect any fateful changes from life and quietly live out their lives. However, history knows many cases when older…

What snacks are hidden by “Madonna della Loggia” Botticelli 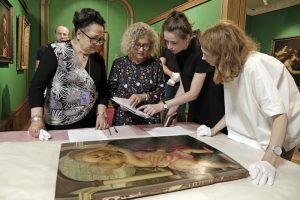 Madonna della Loggia, one of the most discussed works by Sandro Botticelli, will leave his native Uffizi and go on a tour of Russia with three stages:
– from September 4 to 5, Madonna has already visited the Eastern Economic Forum in Vladivostok,
– from September 8 to November 6, it will be presented in the Primorsky State Gallery (also in Vladivostok),
– and, finally, from November 17, 2019 to February 16, 2020, the Madonna can be seen at the Hermitage in St. Petersburg.
Madonna dates back to the period when Botticelli, as a young man, left the workshop of Filippo Lippi (circa 1467) and went to the workshop with Andrea del Verrocchio, another great master who played an important role in his training.

Lippi’s influence
Fra Filippo Lippi – Florentine painter, one of the most prominent masters of the early Italian Renaissance. Lippi’s artistic style became the foundation for the beginning of the work of Botticelli himself, manifesting himself even in the later works of the student. Lippi taught Botticelli the technique of painting panels and murals, taught him the skills of owning a linear perspective. Stylistically, Botticelli acquired a set of types and compositions from Lippi, a fantasy in writing elegant costumes, a sense of form and an addiction to pale shades that are noticeable even after Botticelli developed his own color schemes. Botticelli’s work with Fra Filippo gave him excellent contacts. His mentor enjoyed the patronage of leading Florence families such as the Medici. Subsequently, Botticelli spent most of his life working with the Medici family and their close circle, for whom he painted many ambitious secular paintings (for example, Primavera).

Work with Antonio Pollaiuolo and Andrea del Verrocchio
After completing work in the Lippi workshop, Botticelli began work on improving the soft, fragile figurative style that he had learned from his teacher. To this end, he began to study the styles of Antonio Pollaiuolo and Andrea del Verrocchio, leading Florentine artists of the 1460s. Antonio del Pollayolo is a Florentine painter, sculptor, jeweler and engraver. Representative of the Florentine school of the late Quattrocento. Under their influence, Botticelli created the first sculptural figures. He also replaced Lippi’s delicate approach with strong and energetic naturalism, defined at that time as the standard of ideal beauty (he adopted this from Verrocchio). The Florentine sculptor, artist and jeweler Andrea del Verrocchio is an iconic master of the Florentine Renaissance, who is on a par with Donatello and Michelangelo.
The skills acquired from the best masters of Florence were not in vain: already by 1470, Botticelli had become an independent master and the owner of his workshop. Absorbed in his art, he was never married and lived with his family.

Heroes and plot
The protagonists of Madonna della Loggia are Mary and Baby Jesus (who are also the heroes of many other works by Botticelli), depicted under the loggia.
Baby Jesus gently hugs Mary, who holds her Child on her lap. The picture exudes a tender sense of closeness of mother and child. But there is some concern: Mary seems thoughtful, anticipating the painful fate that awaits Jesus.
Along with more famous works, his workshop during this period was the most popular supplier of Madonnas for private and public customers in Florence. In the art of Botticelli, the Virgin Mary always presents a tall, stately figure, dressed in a simple mantle, decorated with accessories. Almost always, his Madonnas have a pensive mood and inner anxiety.

The scene takes place in the style of a renaissance loggia, named after this work. In the background – behind the arch – you can see the road extending beyond the horizon: this tendency of the “window to the world” is characteristic of the Renaissance. The background is decorated with a picturesque rural mountain landscape and cloudy sky. But the scene itself with the image of a child was a new phenomenon in Italian art of the late XV century. The colors used in the composition are very bright and decisive, very reminiscent of the shades in the work of the teacher Botticelli – Antonio del Pollayolo.
Symbolism

The picture has a number of key attributes that define the symbolism of the picture.
One of the most significant characters is the pose in which the Madonna holds Jesus. Her hands symbolize firmness, confidence and love for the child. The second important element is Mary’s look down and can be interpreted as love for humanity as a whole, for all her children.
Another clear aspect of this picture can be found in the structure of the pillars. The pillars belong to Greco-Roman architecture. In a religious context, they are an attribute of the solid foundations of the Christian faith and the strong supports on which it is built.
“Affection”
In his work, the artist uses the ancient Byzantine iconography, known as Glikophilousa (“sweetly loving” or “sweet kissing”; in the Russian tradition, more often than “Eleus” – “Tenderness”).