How the primitive paintings of Grandma Moses influenced the course of the Cold WarHaving crossed the age limit for 60 years, many no longer expect any fateful changes from life and quietly live out their lives. However, history knows many cases when older… 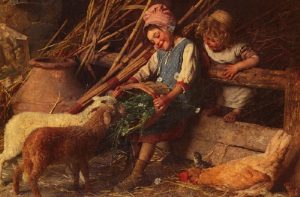 Many viewers are interested in everyday painting of old masters of the past centuries, who knew how not only to reliably capture the life of their people in the smallest details, but also to stop moments in the freeze frame mode. With special trepidation, some painters approached the theme of children, touchingly portraying sincere and immediate children in genre scenes. Among them is the famous Italian Gaetano Cierizi, who occupies a special place in the history of 19th century art.

Gaetano Chierici (Gaetano Chierici) – an outstanding Italian painter, one of those artists who managed to perfectly depict the life of the common people of Italy. Transferring the life of ordinary workers and their children in all its colors and shades to his canvases, the artist left a magnificent gallery of paintings, which is the clearest evidence of that distant time.

Gaetano Chierici (Gaetano Chierici) – an outstanding Italian painter, one of those artists who managed to perfectly depict the life of the common people of Italy. Transferring the life of ordinary workers and their children in all its colors and shades to his canvases, the artist left a magnificent gallery of paintings, which is the clearest evidence of that distant time.

Gaetano Chierici was born in 1838 in the small town of Reggio Emilia, whose inhabitants were mostly peasants engaged in agriculture. The life of the artist himself is inextricably linked with this surprisingly picturesque region, quiet and frankly beautiful. For only eight years, the artist had a chance to live away from his native places in Florence when he studied art. And having successfully mastered the craft of the painter, he returned to his native places and lived there until the end of his days.

His first creations were devoted to the magnificent landscapes of this wonderful land. The sprawling endless fields, flowering green meadows for pastures and the boundless blue sky were prescribed by the artist to the smallest detail and led the viewer to amazement.

However, the greatest popularity and glory during the life of the painter was brought not at all by picturesque landscapes, but by everyday painting. All subsequent creative activity of Gaetano Cierici was inseparably connected with the depiction of the life and everyday customs of the peasants, and more precisely, their children from infants to adolescents.

The artist liked to watch the little inhabitants of his native city, their habits, games and work, to which they were accustomed from early childhood. With such trepidation and tenderness, he wrote to children working in the field along with adults, caring for livestock, showing them at home, as well as playing with peers in their free time.

And the most amazing thing in the artist’s works was that Gaetano portrayed both children and adults as cheerful and happy, despite the poverty and hardships of their lives. That is why this sparkling positive, masterfully displayed on his canvases, so attracted and continues to attract, like a century and a half ago, the gaze of an admiring public to his creations.

Of course, the subtle flair of nature, the artistic vigilance of the famous Italian master were a considerable help to him in creating picturesque masterpieces. The master painted his paintings very skillfully and believably, filling them not only with positive, and sometimes with good humor.

And it was not surprising that soon the fame of the brilliant artist and his stunning works spread throughout Europe. During his creative career, Gaetano presented his creations to the public in Italy, Milan, Parma, Florence, Paris and Berlin, as well as in the United States. For four years in a row, the painting of a talented Italian was displayed with incredible success at the Royal Academy of Arts in London.

And it should be noted that the cost of paintings depicting peasant children sold at well-known auctions in Europe, during the lifetime of the master was so high that he was known as a fairly wealthy person.

The connoisseurs of painting were touched to the depths of their hearts by the ingenuous world of childhood in the Italian countryside and the skill with which the artist embodied it in his paintings. And it should be noted that, without exaggeration, he was a virtuoso in creating genre scenes with the smallest details of a poor peasant life.

The artist died in his hometown of Reggio Emilia on his own birthday, where a few years later a local art school was named after him.