Other worlds in pastel-candy paintings with mysterious subjects 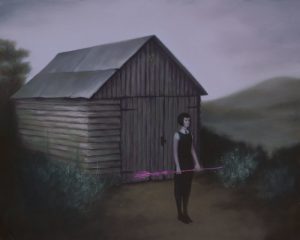 Syd Bee is an artist from Seattle whose work seems to have been torn straight from the world of dreams. Bee uses rich, pink tones in many of his works, exploring dark themes and emotions, and the combination of these opposite elements gives his works a surreal, otherworldly quality. This dichotomy offers the viewer to plunge deeply enough into terribly beautiful art, while exploring the story told in each play.

Sid is a very talented American contemporary artist, creating vivid oil paintings of figures that often seem to exist in a fabulous state, somewhere between life and fantasies. This artist lives and works in Seattle, where she can always be found in her own studio, surrounded by things that inspire her to do an excellent job: a library of fairy tales, comics and two fat cats. In addition to creating her fabulous compositions bordering on magic, drowning in pink colors, Sid is also actively involved in other areas, for example, she was featured on the cover of The Stranger and created cover art for comic books for Adventure Time.

The artist draws her inspiration from books, comics, films and shows, which she is ready to reread and revise several times to create the very atmosphere in which she wants to create, embodying her ideas. From the very first minutes, her paintings cling to the viewer for the invisible strings of the soul, causing emotions, which sometimes can not be hidden at all. It would seem that what can be so special and exciting in such simple drawings, the plots of which often appear on the monitor screens while viewing works by other authors.

But as it turned out, it was this simplicity, which was not overloaded with unnecessary details and colors, that attracted attention so much, forcing one to stare at the pink, cold blue and faded beige colors that add mysterious drama to the images, which keeps the tension to the very end. Each picture takes the viewer to a personal place of acquaintance and intimacy. These mysterious and secluded worlds are exceptional for each of us, but at the same time they are well aware of humanity, since the emotions present are universally understood and experienced.

Before she began presenting her work on the Seattle art scene, Bee studied painting at Cornish College of Art, where she learned a lot about the oil technique, which ultimately served her very well. She also adopted many conceptual ideas about art and art practices during her student days, providing a solid creative foundation for her entire subsequent painting career. After receiving the BFA from the Cornish College of Art in early 2013, Bee began showing her paintings in the Northwest Pacific and beyond. Soon she began to attract the attention of the public and art historians with her dreamy and melancholy works, emphasized by a delicate shade of softness, giving a certain velvety feel to every work and image.

As mentioned earlier, Sid creates figurative oil paintings, which often seem to exist on the verge of fiction and reality. To achieve this visual sensation, she uses the technique of creating a pastel shade around her objects: this leads to soft external edges, reinforcing the mysterious effect produced by the overall storyline. This technique allows you to create an interesting contrast in combination with sullen faces and sad looks of the animal or the person whom it depicts. By now, Sid has already managed to become famous for her ability to portray the atmosphere of a sweet and pleasant dream, which is just a few steps away from stepping on a heel, a haunting nightmare.

I would also like to note a series of works entitled “Sunder & Swell” – this is Bee’s first personal show with a gallery, which included eight paintings and five drawings illustrating the artist’s corporate identity. “Sunder & Swell” is characterized by a typical Sid sugar-pastel palette, consisting mainly of pink, purple and mint colors, mixed with feelings of loneliness, anxiety, fear and insecurity: “I dream of warm, bright colors, where most of the images used were first discovered . Despite the fact that in some images there is tenderness, it is often bitter-sweet. “I am constantly drawn to dark and gloomy things, but at the same time I find freedom and excitement, combining these moments with delicate colors and a palette.”

As a result, all these emotions are enhanced through her insight with color and composition, because in this case the palette plays a dominant force, reflecting the severity associated with these gloomy feelings, which are reflected in capricious stories and memorable portraits. The traditional elements of the portrait and background are mixed with dynamic angles, modern fashion and surreal landscapes that enhance feelings and emotions.