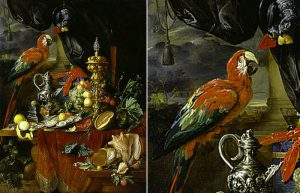 For artists of the Gothic, Early Renaissance and High Renaissance, birds were part of a rich visual symbolism. In a society with limited literacy, allegorical images were vital for the spiritual enlightenment and education of ordinary people. For many centuries, artists assigned special roles to the images of parrots on their canvases. First of all, this is caused by the unusual features of parrots: their spectacularly colored plumage and the ability to imitate human speech. What is the hidden meaning of this bird?

Since the Middle Ages, the parrot has been an attribute of the birth of Christ by the Virgin Mary or acted as a witness to the fall. It has also been noted as the pet of wealthy families. This bird was more noticeable in the Dutch scenes of ordinary life. The parrot often appears in still lifes and portraits, sometimes posing as people or replacing them, playing the role of a woman’s beloved or taunting the stupidities of human behavior.

Thus, it is possible to consider the symbolism of a parrot in the paintings of artists in three guises:

PARAMETS IN STILL LIFES
The genre of still life began its development at the end of the 16th century with domestic and market scenes. Parrots often appear in vanitas still lifes as a symbol of luxury on the one hand, and as the only living element among “dead” objects on the other. The inclusion of parrots with still lifes is also interesting because it connects parrots with the material world, wealth and trade.

This oil painting by Peter Boel is undoubtedly an attractive scene of the vanitas genre. The idea of ​​fleeting life is expressed by dead animals, the most striking of which are the peacock and the swan. The red drapery in the background – an element in the Baroque style – also enhances the atmosphere. Fine copper utensils, a ceremonial dish and a jug are intentionally laid out carelessly, which also contributes to the feeling of the past tense. Still life in vanitas style contrasts sharply with three living things: a parrot, a dog and a monkey. The parrot is an intelligent bird and a good conversationalist – a native of the Amazonian region of South America. He looks at the fruit with an open beak, and his speech contrasts with the “dead” still life. The inclusion of parrots in still lifes is often intended to emphasize the manifestation of luxury.

Jan Davids De Hem is known not only for his allegorical and moralizing floral still lifes. Here he depicts a luxurious vase for wine, a parrot and fruit. The picture presents a real “festival of plenty”: richly served tables literally burst with all kinds of fruits and snacks.
The macaw parrot looks friendly and serves here as an ideal emblem of plenty.
PARROTS IN PORTRAIT PAINTING
In portraiture, parrots are most common, being popular pets in the Dutch upper middle class in the 17th century. In children’s portraits, they are an attribute of education, and in adult portraits they can be a symbol of marital fidelity or emphasize the status of the heroes of the picture.

This painting is considered a late work of Jordaens. The identity of the young man is unknown, but his magnificent clothing proves belonging to the rich urban elite. A large collar fastened with lace and a tassel adorns its appearance. The gloves that the young man holds in his left hand are another confirmation of the solid status of the owner. It is likely that the man ordered a portrait as evidence of his rich position, and in this case, an expensive exotic bird emphasized his pedigree, prosperity prosperity.

In the 17th century, the connection between women and birds in the cages was reflected especially vividly in moralizing paintings (for example, “A Pair with a Parrot” (1668) by Peter de Hoch). The picturesque plumage of parrots is very beautiful and decorative, and this is a key feature that must be remembered in relation to representations of a woman. In this picture, the parrot complements the decorative elements in a work of art and gives an additional shade to beautiful objects. The image of a parrot with a woman hints that the woman is as decorative (beautiful) as the parrot, and possibly even exotic.

It is impossible in the stories of parrots from the paintings not to mention the self-portrait of Frida Kahlo with parrots. The painting was painted in 1941, shortly after the death of Frida Kahlo’s father and at the beginning of her intense physical suffering. It depicts Frida in a traditional Mexican dress that stares intently at the viewer. Her gaze itself captures, distracting attention from the details of the picture. Despite their vibrant colors, parrots do not overshadow Kalo. Instead of belittling her presence, they strengthen her by introducing another dimension into her. Frida becomes even calmer, even more restrained, because parrots bring a disheveled mess with them. “Me and My Parrots” is like an oasis of calm in the history of Kalo.