What is encrypted in the paintings of the most mysterious artist of the Golden Age: Alphabet of painting by Jan Vermeer 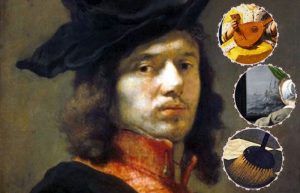 One of the most famous artists of the Golden Age of Holland. His refined painting technique, experiments with optics and perspective, the unique way of transmitting light and the poetic nature of his images remain unsurpassed in their originality and power of influence on the viewer. This is the talented gifted Jan Vermeer (1632–1675).

In the 1600s, many people could not read or write. In this regard, the work of artists was very helpful: they told their stories through the characters in the paintings. Especially relevant were these picturesque stories during the time of religious persecution and the Inquisition.

Libra is a symbol of weighing the soul, its actions, a metaphor for the choice between good and evil. (“Woman Holding the Scale”).

Globe – creating the paintings “Geographer” and “Astronomer”, the artist conceived the image of a scientist involved in science, the symbol of the universe, and the idea of ​​the ultimate nature of earthly existence connected with it. This was his favorite motif in the paintings of the XVII century.

Stormy sky is a brewing problem.

The double-headed eagle is a symbol of the Habsburg dynasty, which since the 16th century ruled the seventeen provinces of the Netherlands. History inspires the artist. In art circles since antiquity, this is his most important subject, giving artists the right to a prestigious position in society. (“Glass of wine”).

Pearls – vanity (“Woman with a Pearl Necklace”, “Lady and the Servant”, “Love Letter”, “Woman with a Lute”, “Guitarist”).

Woman – in the scriptures and paintings of the artist symbolizes the Church.

The mirror is a symbol of appreciation of the strengths and weaknesses, good and evil, the duality of female nature.

A serpent crushed by a stone is a symbol of the victory of Christ.

Map of the Netherlands – a geographical map in the XVII century. was a valuable piece of furniture, testifying to wealth, and at the same time about the patriotic feelings of its owner (“Artist’s Studio”, “Young Woman with a Jug of Water”, “Officer and Laughing Girl”). In “Woman Reading a Letter,” a map of the Netherlands on the wall behind meant that the letter was written by a traveling husband.

Powder brush – symbolizes the frivolity of young women from the upper class, the lack of household chores and the tendency to frivolous activities (“Woman with a Pearl Necklace”).

The book – draws attention to the importance of the plot (“Artist’s Studio”).

A ship at sea is the theme of the painting right behind the maid’s head, and it symbolizes the search for a safe haven (“Love Letter”).

A jug of wine and a vase of apples – a symbol of the fall of man in the Garden of Eden (“The Maid Sleeps,” “The Girl Reading the Letter by the Open Window”).

The broomstick, which represents the Dutch proverb “married to a broomstick” is another way of saying that they live together outside of marriage. may indicate that the marriage has been forgotten or postponed (“Love Letter”).

Musical instruments – symbolize the harmony between a man and a woman. Music is a companion of joy, a balm of sorrow. In Vermeer’s painting, the musical theme often echoes the theme of love and temptation (“Interrupted music lesson”, “Music lesson”, “Concert”, “Lady sitting at the virgin”, “Woman with a lute”).

Lonely landscape with a man – illustrates the separation of lovers (“Love Letter”).

A pair of slippers is a symbol of a woman with dubious morality (“Love Letter”).

The table of a woman is the table of the Lord, and he speaks of unity with Christ, which is traditionally and symbolically found in the symbols of bread and wine (“Christ in the House of Martha and Mary”).

Fabrics – decor that contributes to the success of the picture. Tablecloths and woven fabrics give the paintings the contrast Vermeer needs to consolidate the geometric layout. A very often used interior item (“Woman with a Pearl Necklace”, “Woman Holding a Scale”, etc.).

Three caskets (for money, for jewelry, for scales) – a symbol of material wealth and vain joys (“Woman writing a letter”, “Woman holding a scale”).

Apple – means original sin. (“A girl reading a letter by the open window”).

Thus, objects in the paintings of Jan Vermeer hide the connotations laid down by the artist. Symbols convey contrast, complement the composition and personify the true plot.

There is still much to learn about the work of this artist. And recently it became known that Cupid, hidden in Vermeer’s painting 200 years ago, will appear before the audience.