What is the secret of the paintings of Giuseppe Arcimboldo, which inspired Dali and other surrealists of the XX century 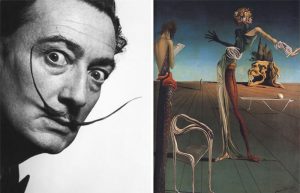 Fantastic talent and eccentric portraits made Giuseppe Arcimboldo, one of the strangest Renaissance artists, world famous. His compositions of portraits of flowers, fruits, leaves, fish and books are unique in their kind. The amazing canvases of Arcimboldo show wit and irony. It was thanks to his figurative representations that Archimboldo became one of the inspirers for the surrealists of the 20th century.

The Spanish artist Salvador Dali (1904-1989) is one of those who appreciated the works of the Milanese master most of all for their unusual metaphorical and fantastic character. He interpreted several of the motives of the Renaissance master in his own works. When Dali paints objects that are stretched, laid out or transformed, he supports the tradition begun by Arcimboldo.

Habsburg darling
The life and most of the work of this artist is covered in a veil of secrecy. How did a young Milanese artist become a favorite of the three Habsburg emperors, rulers of the Holy Roman Empire? Archimboldo, portrayed as a court painter, spends two years in the service of Ferdinand I, performing numerous portraits of the imperial family, as well as his first series, The Seasons. This is certainly a great honor for any artist and recognition of his merits. When the emperor dies in 1564, his son Maximilian II (1527-1576) ascends the throne. The change of monarchs does not change anything in the life of Giuseppe, who remains a very popular portrait painter at the Habsburg court. There he finds himself in a narrow and self-sufficient circle close to the reigning house. As a friend of the artist testifies, the Jesuit father Paolo Moriggia: “He was one of those whom Maximilian noticed and respected, and then accepted into his service for a decent salary, endowing him with great sympathy. Or another testimony of Gian Baggist Lomazzo:“ His so respected by Maximilian II, that he gave all the ideas to his discretion, adapting to the taste of Archimboldo and endowing him with friendship ”

Palace organizer
The imperial court of the Roman Empire is a kind of microcosm, striving to equal in magnificence, sophistication and erudition with Italy and France. Appointed by the court painter, he will serve the Habsburgs for twenty-six years. Besides the fame that painting brought him, Archimboldo became famous as the organizer of the imperial festivities. Giuseppe comes up with images of costumes, masks, entertainment, including the marriage of Archduke Karl of Austria with Maria of Bavaria, which took place on August 26, 1517. He organizes a large allegorical procession in the gardens of the Royal Palace in Vienna, in which Maximilian II himself takes part in the society of imperial dignitaries and ambassadors. The monarch defiles under the symbols of Europe, surrounded by the “Seasons”, the costumes of which were dressed and the commanders of his army.

Thanks to his inexhaustible imagination, Arcimboldo comes up with very original costumes for imperial celebrations, similar to this one, reminiscent of some unusual, fantastic animal.

Painting “Librarian”
Arcimboldo became the official portrait painter of Emperor Maximilian II in 1562. The artist draws allegorical portraits of the attributes characteristic of the profession. “Librarian” is one of a series of paintings by Archimboldo, representing dignitaries and persons from the immediate environment of the emperor.

The portrait consists of books (body, head and hair), curtains for an office (clothes) and tails of animals and feathers (beard). The librarian has an open book on his head in the form of a hat, his eyes are rings from rings, as an attribute of the fussy storage of jewelry. His beard is a set of feathers (you need to wipe library dust with something), and the rest of it is formed by a stunning pile of books. His torso is formed by stacked books, and a hand lying on a plane is a few large books, stacked in such a way as to imitate the shoulder and forearm. There are two versions of the person hidden in the portrait. On the one hand, it is believed that this is a portrait of Wolfgang Latsius, a humanist and historian who served the emperors of the Holy Roman Empire of the House of Habsburgs. Lazius at the same time served as librarian of the emperor and superintendent of the imperial collections. On the other hand, one can recognize the portrait as a comic composition, a metamorphosis dedicated not to those who like to learn, but rather to materialistic collectors of books who are more interested in acquiring books than in reading them. Archimboldo may have created this portrait to make fun of scholars and the wealthy elite: since books at that time were accessible only to the very wealthy, many owners collected them as attributes of status, unable to read the contents of their collections.