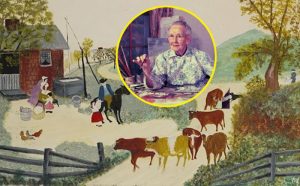 Grandmother Moses (1860-1961), whose real name is Anna Mary Moses, nee Robertson, is a well-known American amateur artist, one of the most famous representatives of primitivism in the history of painting in the United States. The farmer’s wife and mother of 10 children, five of whom died before reaching the age of one, became famous when she was over eighty.

The story of this amazing woman, who has gone from poverty to the heights of prosperity and glory, has always fascinated and echoed in the hearts of millions of people around the world. The famous grandmother Moses surpassed all records, becoming unimaginably famous and in demand. For a quarter century, the work of Anna Marie conquered not only the whole of continental America, Europe, but even the country of the rising sun – Japan.

It is no joke – more than 30 expositions held in the United States, ten in various countries of the American continent, one on the Japanese islands and this is not counting the many European ones. Everywhere, the primitive works of the American artist were warmly received by both viewers and critics. In 1949, the US president himself, Harry Truman, presented the famous old woman with the National Women’s Press Club Award, and on the 100th anniversary of her celebration, New York State Governor Nelson Rockefeller declared September 7th “Grandmother Moses Day.” Her photographs were printed on the covers of Time and Life magazines, moreover, the crater on Venus was named after this fragile woman. Could a simple woman from a remote village ever dream of this? Well, of course not.

However, the most ordinary viewer was delighted and amazed by the artist’s not so picturesque works as the personality of Grandma Moses herself (as her journalists called her), who lived a difficult village life for a century. The artist died in 101 years of life, leaving behind a legacy of 1,600 paintings and drawings.

And so it all began …

Anna was born in the outskirts of New York State in 1860, in the county of Washington, which in those early years was deaf. In childhood, Anna Mary received an elementary education, having learned only reading and writing, which, however, was quite natural for the children of the poor at that time. In the future, she was waiting for heavy rural wage labor from dawn to dawn for wealthy neighbors, to whom she was handed over to the service of an 11-year-old girl. And when Anna grew up, little has changed in her life.

Having married the same wage worker, whose soul was not even a penny, for many years she had to work hard for the gentlemen. And eighteen years passed before she and her husband were able to save up money to acquire a plot of land and build their own farm. In 1905, the couple settled on their farm near the small town of Eagle Bridge. And by then, the four Moses had five children.

Anna woke up before dawn, and having milked the cows, she hurried into the field. Her responsibilities also included raising children, cleaning the house, doing laundry, cooking meals. The whole life of a poor woman was spent in hard work and care for loved ones. Therefore, her body quickly wore out, and she could no longer physically work for old age. In 1927, Anna’s husband, Thomas Moses, died suddenly, and the lesser son took up the affairs of the farm. And mother, no longer able to farm on the farm, became interested in embroidery. But soon this work became too much for her: painful joint pain deprived the woman of this occupation.

At the age of 76, a woman, on the advice of her daughter, decided to take up brushes and paints.
She generously gave away her first work to relatives and friends of the villagers. Thus, several works appeared on the walls of the local pharmacy. They then noticed a road engineer collecting art. He liked the primitive, but very sweet creations of the novice artist, and he bought several pictures from her grandmother Moses for sheer pennies. It happened in 1938. As it turned out later, it was her first step towards fame and popularity.

And it should be noted that the decision to engage in painting was very opportune: the end of the 30s in the USA was exactly the time when interest in self-taught artists from the backwoods reached its climax. Their works willingly exhibited exhibition halls, and private galleries, as well as the Museum of Modern Art.

The appearance of the original artist in the sky of American art caused a real sensation – the audience literally fell in love with this “dry, short, very simple and charming old woman with lively eyes, dressed in a simple black dress and looked like a Victorian hat.”